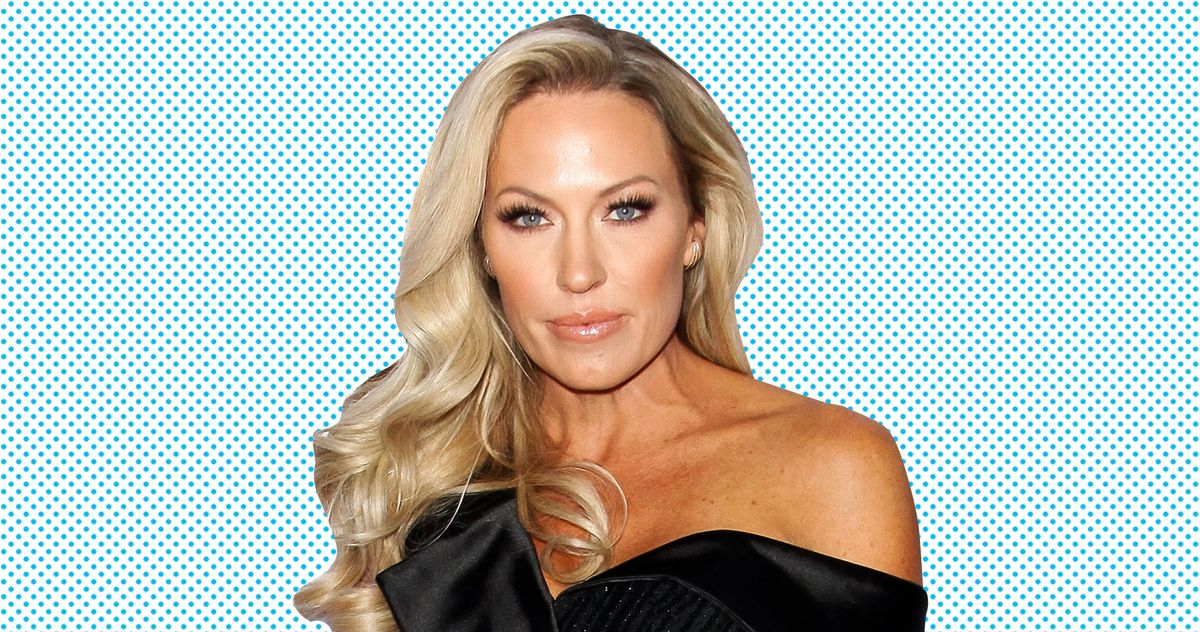 When she was first announced as a new addition to the cast of The Real Housewives of Orange County in 2019, Braunwyn Windham-Burke did not seem so different from the women who had cycled in and out of the series over the previous 13 seasons. The hair, the body, the name – everything seemed like classic Orange County. And yet Windham-Burke turned out to be a wild child who instantly shook the boat, locked his lips with employees Tamra Judge and served to ridicule RHOC AND Vicki Gunvalson.

Season 15 saw the referee and Gunvalson’s departure and the arrival of a brand new Braunwyn. During the premiere season in October, she announced that she was an alcoholic, and on Wednesday night of the season, she came out as a lesbian in a confession (she previously shared the news in a GLAAD interview in December that took place after the season ended with the recordings.). Between these crucial moments, Windham-Burke protected himself in the midst of the coronavirus pandemic; participated in Black Lives Matter protests; navigating an increasingly complicated 26-year marriage to her husband, Sean; and – in truth Housewives fashion – accused several women of lying.

With almost a year of sobriety under her belt and a lot of headlines about her boyfriend, Wyndham-Burke spoke with Grib about one of the most eventful second-year seasons in Real housewives history.

Suffice it to say, it’s been a great year for you. Looking back on where you were before you started filming this season, could you have imagined ending up here?
My one-year sobriety is January 30th in about two weeks. I keep blinking back to what I was doing at this point last year? Because just before I got sober, it was not beautiful. No, I do not think I could have it. When I stood on that ski slope and said to my producer: “I am an alcoholic; let’s do this, “I had no idea what I was really going into. I had no idea how hard it was going to be.

Early sobriety can be a really uncertain time, and you did it in front of the cameras. But there is also built-in responsibility in a reality show. Does it make it easier or harder for you to film?
There were some tough moments. There was a party in Shannon [Beador’s] house that I ran from. The camera team followed me back to my house. I had every intention of drinking that day when I left Shannon’s house. I tried to kick camera crews out. On the one hand, was it difficult to film it? Absolutely. The other side of the coin is that the production stayed with me. They knew I was going to drink, and they did not leave me, and they ended up driving me to one of my first AA meetings, which was beautiful.

Drinks have been a big part of Housewives universe for a while. Did it encourage you to drink more when you signed up for the show?
I think the movie aspect that people are not aware of is that we are in a bubble. We are in a very safe bubble. We are surrounded by people who take care of us; we know we have a safe trip home. We are a bit isolated when we film. People do not come up to us. There was a sense of security, and there is also a sense of, You can do whatever you want and that’s okay. You ask for a bottle of tequila, it just appears magical, and there is no judgment because it is not a production job. They do not judge us; they just film us as it should be. So there was definitely a sense of, I can do what I want. It was quickly replaced with many nights where I darkened out.

In the final Kelly [Dodd] said that sober Braunwyn is not the same person as drunk Braunwyn. Do you agree that you are a different person than you were your first season on the show?
Absolutely. I think this season was a lot of growing pains for me, a lot. You lived my life with me in real time and got sober for the first few months, so it was hard. Who I am now as I approach a year is not something I was a few years ago.

Does it bother people like Kelly? Yes, of course it does. Many times when you start getting better, people take it as an insult to them. They look at their own choices. And it’s a pretty common thing in sobriety that you lose friends, and the people who are most critical, for the most part, are the ones who do not want to look at their own behavior.

You said you expected people to have this reaction, that you got sober was just a story for the show. Did you prepare to know what was coming and how have you been able to tackle that reaction?
I knew it was going to happen, and I knew exactly the cast members it was going to come from. They are very judgmental, they are a bit petty, and they would rather take the cheap shots to get their five seconds of having their name out there than really take the time to pick up the phone and call me.

It is not false; it’s not a story – find something else. This is too important for me and other people. I have worked hard. It’s almost a year. I have struggled for every single one of these days, sometimes I literally sit on my hands to not drink.

Let’s talk about a happier public revelation. That Housewives franchise obviously has a large LGBTQ + viewership. Why do you think it’s taken so long to see a lesbian Real Housewife out there?
I find it very easy to get stuck in our comfort zones. Much of the country is not okay with this. I told my husband the other day when I was walking down the beach with [girlfriend] Kris holding her hand is still very different from holding Sean’s hand. There is still a lot of criticism and a lot of judgment. And I think a lot of people will not be the first to rock that boat.

I was wondering if you could talk about the timing of your GLAAD interview, which happened in the middle of the season, but after you finished filming.
TMZ had some photos of me and my boyfriend and they have a policy of not going beyond people. So they came to Bravo PR and they said, “We have these photos, but we are not running them.” And [Bravo PR] came to me and said, “Okay, this is out there; it comes out there. “Because I did not hide it. Kris came out of the closet 12 years ago; I would not push her in again. How can we do it in the best way? And I really wanted to find a place that was respectful and that would really tell the story.

Was it hard for me to say it the first time? Yes. If you look at the GLAAD interview, you can see me. I’m shaking. I shake throughout the video. But now that I have come to the other side of it, I am glowing and lighter and happy.

You have become very politically pronounced over the last year. How did you end up – in this largely white, largely conservative city – protesting with Black Lives Matter?
We had [the murders of] Ahmaud Arbery and George Floyd so close to each other and here I am in my home, I have nowhere to be and for some reason it was a light bulb moment for me. I could not reconcile it. I thought, I have to write this. I had never posted anything on my Instagram that was controversial or would annoy people. I always kept my political opinions quiet. I did not want to rock the boat. But to see a man being murdered was like, I’m done.

It just started a little bit from there. How can I get involved? What can I do? [Activists] said, “You are a middle-aged white woman, you just have to show up. Because your body can protect a colored person. You will not be beaten or arrested. “And it is true, I was never beaten up and I was never arrested.

You also talked to the women in the show about BLM and why you protested. It seemed that some were more receptive than others. Did you find that experience brilliant?
Talking to Gina [Kirschenheiter was] amazing and that’s what you want to happen. You want someone who – like me, like Gina – was not really aware of what was going to happen, Okay, I get it; what can I do? I want to do what I can.

Talking to Kelly is like talking to a wall. It’s painful. Talking to Emily [Simpson], like a wall. They are so ingrained in their white privilege that they cannot even see another side of it. Kelly throws out, “Well, I’m Mexican.” Well, you are granted all the privileges of a white person. When you were arrested, you were released. That would not have happened if you were a black woman, let’s be honest.

When I go to the beach, I’m surrounded by Trump signs. So I was surprised? No. Was I discouraged? Absolutely. Did it make me question why I live here and why I raise my children here? Yes. I think Kelly and Emily are pretty indicative of how most people feel about this.

Traditionally, it has been the black real housewives who are the most obvious about their policies and support progressive causes. White housewives tend not to talk about these things. Do you see it changing?
The more experienced housewives, no, I do not think they are going to speak up. I dont do that. I think they’ve found their groove. They have their followers; they have something that works for them. But I definitely think you’ll get some more young, progressive housewives. That’s the direction I’ve seen on the other shows. And I hope so Orange County do it. There are many young, progressive people here who want change. It does exist, just not necessarily on our show.

When you think about your future on the show, do you find yourself finding common ground with these women – and people in Orange County as a whole – who are perhaps more judgmental about your politics or your identity?
If you voted for Trump, I will not find a common ground with you. I do not want to. I dont do that. If homophobia, sexism and racism are not deal-breakers for you, I will not know you. I dont do that. We never find a common ground because – I’m sure we’re all seen last week. If you still support Trump after all this, then you are inherently devastated.

As for cast members, we see that. Gina has been amazing. Shannon and I are fine. Kelly and I – no, I do not think Kelly and I will ever get over it.

Everyone else, yes. This show has a way of taking turns that you have never seen coming. I think any long term viewer knows that there are friendships and relationships that you never thought were possible.

This interview has been edited and condensed for clarity.