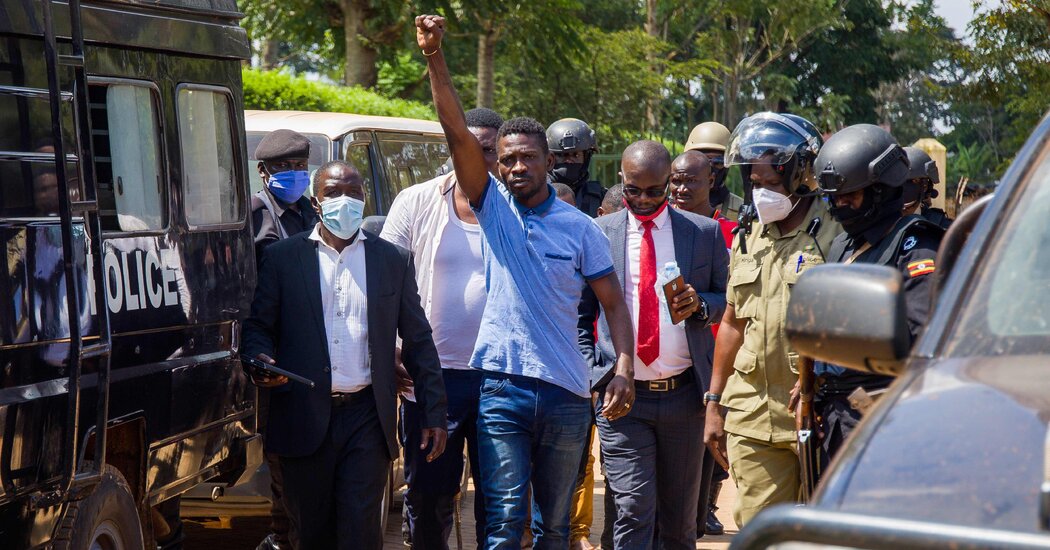 NAIROBI, Kenya – Ugandan authorities on Friday accused an opposition leader and presidential candidate of violating coronavirus rules and then releasing him from prison, two days after his arrest sparked nationwide protests that led to the deaths of at least 28 people and nearly 600 arrests.

The candidate, Bobi Wine, arrived in court on Friday in the eastern part of the city of Iganga under strong security. He wore a blue polo shirt and jeans and looked run down, but remained steadfast in his decision to take on President Yoweri Museveni, who has ruled Uganda since 1986.

“It has been hard. It̵

7;s been hell, ”said Mr. Wine in a video streamed directly from the courtroom on his Facebook page before receiving bail and being released. “We must be free, or we must die while trying to be free. We are not slaves. ”

Mr. Wine, whose real name is Robert Kyagulanyi, was arrested Wednesday morning in the eastern district of Luuka as he was preparing to hold a campaign rally that authorities said violated coronavirus security guidelines for political campaigns. After he was pushed into a police car, authorities took him to a police station, where his campaign team said he was denied access to lawyers, doctors or family members for nearly two days.

The deadly violence came just over a week after the parliamentary election campaigns began, and two months before more than 17.6 million Ugandans are ready to vote in more than 34,000 polling stations. Mr. Museveni, 76, faces 10 other candidates for the election, including Mr. Wine, who is 38 years old.

Originally a musician, Mr. Wine to the limelight for his songs, which accused the president and his government of restricting freedoms and being an obstacle to Uganda’s progress. In 2017, Mr.Wine won a seat in Parliament, just as Parliament passed a bill that eliminated the president’s age limit of 75 – effectively paving the way for Mr. Museveni to run for a sixth term.

Mr. Wine’s arrest, the second this month, reflects adversity for opposition figures in nations across East Africa – including Burundi, Tanzania and Ethiopia – as they challenge entrenched leaders and political parties.

Authorities had previously arrested Mr. Wine several times. But after the arrest on Wednesday, demonstrations and riots broke out across the capital Kampala and in major cities with video footage showing burnt tires and blocked roads. Patrick Amuriat, another presidential candidate, was also detained that day for planning an unauthorized gathering and was later released.

Police say 28 people died in the upheaval – although some news reports cite higher numbers – and 65 were injured.

On Friday, authorities accused Mr.Wine’s party, the National Unity Platform, of organizing the violence and using social media to sow discord. They said they had put together exhibits including “bows and arrows, piles of stored tires, bottles, drums of fuel and evidence of mobile money transactions financing the rebels.”

“All indicators reveal that these events were not just improvised actions, but part of a loosely coordinated campaign,” police spokesman Fred Enanga said in a statement.

Human Rights Watch said the government used Covid-19 measures to crack down on the opposition and the media, urging authorities to investigate the killings and allow for peaceful rallies. Uganda has so far reported 17,148 infections and 159 deaths due to coronavirus.

In his speech on the campaign track, Mr. Museveni Friday the protesters and said that external parties had an influence on the events in the country.

“Some of these groups are used by outsiders, homosexuals, I do not know – groups out there who do not like Uganda’s stability, Uganda’s independence,” he said in a video posted on Twitter. “But they will discover what they are. Searching for.”

In his early terms, Mr. Museveni credited for bringing peace, stability and economic growth to the country after years of political violence and unrest. But his government has received growing criticism for, among other things, corruption and persecution of political opponents, gays and journalists.

Joel Ssenyonyi, a spokesman for Mr.Wine’s party, said arrests and violence would not deter it from continuing to campaign against Mr. Wines. Museveni.

“The brutal actions are intended to weaken those of us in opposition,” he said, “but on the contrary, our determination is strengthened.”