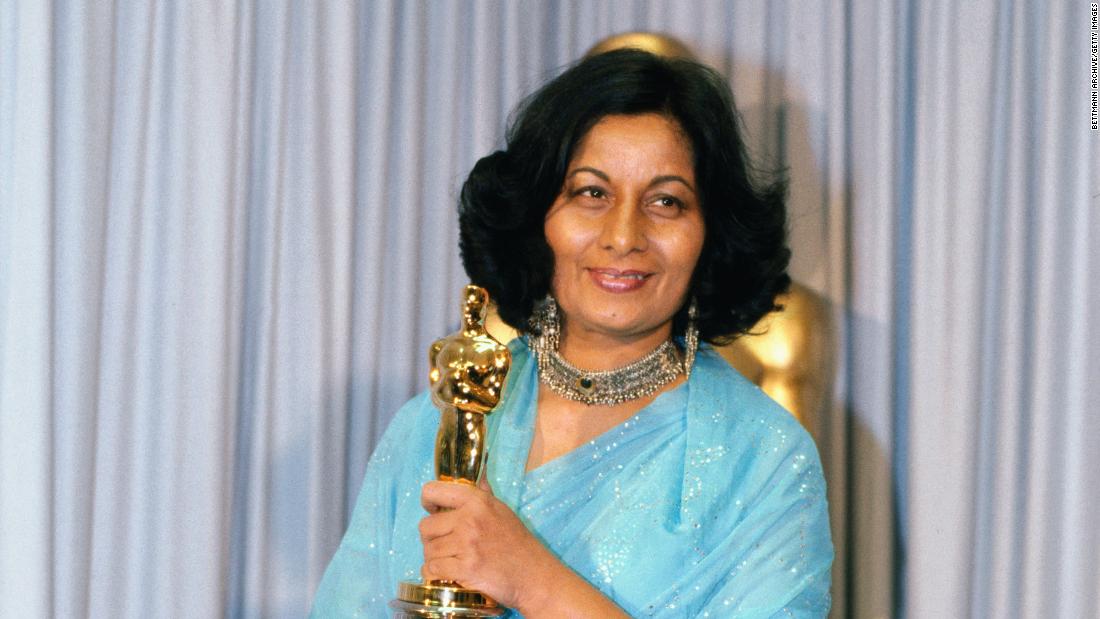 India’s first ever Oscar winner, costume designer Bhanu Athaiya, died at the age of 91. Athaiya, who dressed in over 100 Bollywood films and gained international recognition for her work on the 1982 film “Gandhi”, died in Mumbai according to daughter Radhika Gupta.

She was diagnosed with a brain tumor eight years ago.

Speaking to CNN, Gupta remembered her mother’s “childish” curiosity and said “she never felt like she knew it all.”

; In her healthier years, she was “unstoppable,” she said.

Sunil Seth, chair of the Fashion Design Council India, said she has been a “torchbearer of design”, in a statement shared with CNN. “We, as a design brother, welcome her expertise not only in cinema but also by proving to the world the enormous role fashion plays in shaping a personality, both on and off screen,” he wrote.

Born in 1929 in Kolhapur, in the state of Maharashtra, Athaiya began designing film costumes in the 1950s and worked on a series of productions with Guru Dutt, one of the most famous directors of the time. She continued to collaborate with filmmakers, including Raj Kapoor and Raj Khosla.

While working primarily on Bollywood films, she produced costumes for director Conrad Rooks’ 1972 film “Siddartha”, an adaptation of the famous Hermann Hesse novel. But it was her work on Richard Attenborough’s “Gandhi”, a biography based on Mahatma Gandhi’s life, that threw her into the global spotlight.

At the 55th Academy Awards, Athaiya claimed the award for best costume design (along with his co-designer John Mollo), one of eight Oscars won by the film that night. In her brief acceptance speech, she said the credit was “too good to be believed” before thanking Attenborough for “focusing the world’s attention on India.”

Athaiya continued to work in the later decades of his life and received recognition from the industry for his rich visual impression of 19th century India in Ashutosh Gowariker’s critically acclaimed “Lagaan”. Her work on the film earned her Best Costume Design at India’s prestigious National Film Awards in 2002.

After her death, tributes flooded from India’s arts and entertainment worlds, with actor Aamir Khan, who starred in and collaborated with Athaiya in “Lagaan”, tweeting that she “beautifully combined accurate research and cinematic flair to bring the director’s vision to life” “Meanwhile, actress Kasturi Shankar described Athaiya as a” legendary costume designer and pioneering woman. “
Politicians also took to social media to honor the late Oscar winner. MP Raj Babbar, a well-known actor before the 2015 parliamentary elections, wrote on Twitter that Athaiya “made costume design a classic art” and added: “(I) was privileged to wear her designs in my first films … Her death is a personal loss. “

Top Caption: Costume designer Bhanu Athaiya behind the scenes with his Oscar after winning the Oscar in 1982 for “Best Costume Designer” for his role in Gandhi.

This story was updated to include comments from the family.

Most fans hate Amelia, but would hug her in the ‘That’ wedding episode

Ashlee Simpson and Evan Ross welcome another child together