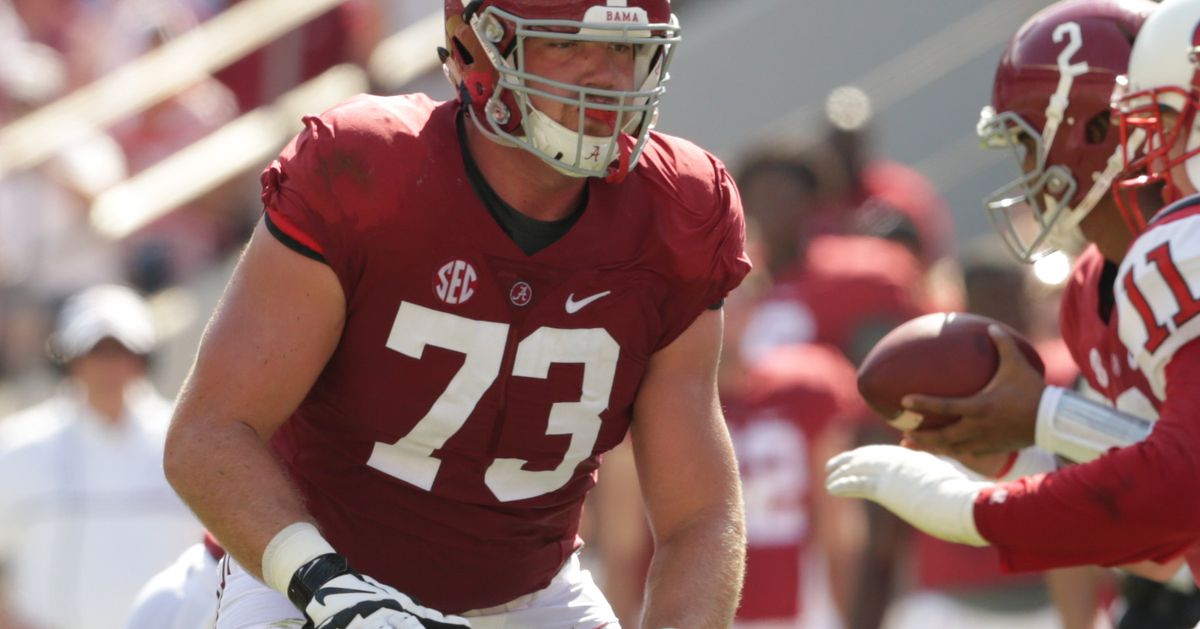 The NFL draft begins on Thursday night, and speculation and thoughts are tied to who the Vikings could or should do with their first round selection. Of course, there are always surprises when the draft unfolds, and it is therefore difficult to predict which players will be available at # 18. However, given the offensive line needs of the wrap and this year's offensive line, there are a few outlook that stand out as the best games – and best suited to the Viking's offensive line.

First choice should be offensive line

The first thing to be said is that an offensive liner should be the first choice for the Vikings. There are some scenarios where perhaps a defensive lineman or Iowa is tightening to the Vikings of # 1

In addition, many of the top defensive lines are placed higher in general than the offensive lineage teams who choose prior to the Vikings, in need of both, can favor defensive side – which would cause more top-off lines to become available to the Vikings at #. 18.

Secondly, more than one starting offensive linem is needed, and then one waits past the first round to select one making it less likely to draw two with immediate starting ability.

Links to profiles by clicking names.

Best game for the Vikings in the first two rounds

There are a few good prospects that practice the whisper's list of value and overall fit for the Vikings. It is hard to say what is the overall best choice and I expect some musical chairs in training camp to find the best positions for starters, but here are the best value and overall fit prospects: [19659009] Jonah Williams, Alabama

There is some divergence of opinion about Jonah Williams, who last played left tackle in Alabama, but also played real tackle and could also play guard. Some scouts even think he could even be a good fit at the center.

Williams is both schema and position versatile. He could play in zone or space arrangements and virtually any position along the offensive line. For the Vikings, his best place can be either left or right tackle, or possibly left guard.

Most evaluations of Williams rage about his technical ability. Things like hand placement, footwork, recognition, body control, soccer IQ. These are evident in his film in Alabama, where he distinguished himself from top competition in passport protection. Other positive things for Williams is that he is only 21 years old and he has three years starting under his belt in Alabama.

His greatest disturbance is usually his yardstick. His 33 5/8 "arms are a little short for a left tackle (Riley Reiff is 33 1/4") and none of his Combine measures really stood out. There is also a general for many Alabama prospects: they are generally very trained, so there is not much coaching up for them at the NFL level.

But at the end of the day, scouts say what matters most is the player's movie, not the Combine or Pro Day measuring instruments. I'm not sure how well 37-year-old Andrew Whitworth, or 34-year-old Joe Staley would do in Combine Events at this time, but they are still among the very best left tackles in the league. And Williams' tape measure was very similar to David Bahktiari, who was the top ranked left tackle last season.

With regard to coaching, without reflecting on the new offensive line coach Rick Dennison, the offensive line coaching has not exactly been the strength of recent years for the Vikings, so it is probably a good thing to have an offensive lineman already is skilled technically. and more of a question mark for those who need good coaching to reach their potential.

Generally, Williams is the most NFL ready for the offensive linemen, based on his performance against NFL quality competition in Alabama and refinement of his technique. He would also be a good value for the Vikings at # 18 as he is generally placed at least as high and as high as # 4 in some locations.

Risner was a four year starter in Kansas State – first in the middle and then his last three years on the right tackle, with some spot guard as well. And while the Big 12 does not present the same level of competition that Williams faces in the SEC and championship games, Risner has been an extremely consistent top player in both passport protection and race blocking throughout his four-year career in Kansas State. So even though you can reduce the level of competition to some extent, Risner has easily tackled the best grades among offensive tackles over their college career. I made a profile piece on him earlier this year.

Risner is also seen as a diverse arrangement, with strength and size to move people into a space plan, and also the lateral agility of a zone system. Risner played in a combination of interior zone and power / gap arrangements in college. He could play anywhere along the Olympics for the Vikings, but right tackle, left guard or center might be his best fit.

But besides his performance on tape and tailor-made, Risner also brings some intangible assets that could be useful for the Vikings offensive line. First, he brings a maul and finisher mentality in his style of play, with excellent competitiveness in physical form, playing through the whistle and playing through injuries. He has been a 3-hour team captain who likes to talk trash and communicate with his fellows during and between plays to make adjustments as needed. These qualities have been missed on the Viking offensive line and a guy like Risner could really add to the overall game of the line with these qualities. This leadership, toughness and communication skills would also make him a good mid-pass where he played well as a freshman.

Risner also has average athletic ability – resembling Williams – but slightly longer, stronger and larger in general. He is not quite as refined a technician, but what he lacks stands for in his competitive toughness, which shows in his film and his consistently top characters throughout his college career. Risner would be a 24-year-old rookie who is negative for some.

Risner may not be as good a value at # 18 as Williams, but he might as well fit the Vikings – or better. Risner would most likely start the right tackle for the Vikings, with Brian O'Neill moving to the left tackle and Riley Reiff to the left guard. But there is also the possibility that Risner replaces Elflein in the center, leaving Reiff and O & # 39; Neill to measure the tackles unless the Vikings cast off to another starting offensive lineman.

Lindstrom is a guard or center view of the Vikings. He mostly played the right guard during his three seasons at Boston College, but is seen as having the mental ability and skills to play center as well.

Lindstrom would most likely fit the left guard for the Vikings, but possibly also in the center. He is a good form of Vikings out-of-zone schedule – athletic with a quick first step – and is generally seen as an NFL clear guard that can begin as a rookie.

Lindstrom generally gave a good character in both passport and ongoing blocking throughout his career at BC, even though he is better at passing pro. Not many penalties, 34 1/8 "arm length and excellent athleticism as shown in his Combine performance round out a rather solid guard view of the Vikings.

Both Risner and Lindstrom stand for their running-blocking ability, which is something the Viking's offensive line has Missing largely across the board.

McCoy is a strong, hard center that has done well in a Texas A&M zone arrangement. His arms are a little on the short side even for an inner lineman (33 "), which makes it harder to maintain blocks against longer defensive linemen, and he must develop his handshake / location to help alleviate this problem, but otherwise he is a good fit both from a scheme and a competitive toughness perspective. He was better than Garrett Bradbury – another top center view – in both pass pro and run block and top competition.

As interior linemen I do not see that Lindstrom or McCoy is as good a value in the first round, but would be good picks in second or later.

Some other decent choices …. But maybe not so good

Other prospects worth considering, but maybe not quite as good as Williams or Risner are Cody Ford and Andre Dillard.

I've been back and forth on Cody Ford. While still not a bad pick, he didn't go as well as Risner in the Big 12, especially throughout his career, and has not as much experience as a starter. He may have a higher ceiling than Risner, but also a lower floor and is not an NFL clear as either Risner or Williams. Ford also had several penalties – especially last year on the right tackle and not as well when playing the left guard.

Other Dillard qualities similar to Jonah Williams left tackle, but not quite the competition that Williams faced. Dillard is more athletic but not developed in his technique, which requires some adjustments at the NFL level. Run blocking for Dillard has been more inconsistent with his college career, and his 33 1/2 "arm length is also not ideal for an NFL tackle either. I also tend to be a little more suspicious of the Pac-12 offensive linemen ( Colton Miller, Josh Garnett, Jake Fisher, Garrett Bolles and Andrus Peat), which they haven't done as well as expected in the NFL.

On the inside line, Garrett Bradbury has a lot to suffer, but I'm not a big fan of its 31 3/4 "arms, which are very short even for an inner lineman and will make it very difficult for him to maintain blocks in the NFL. Not much not to like about him otherwise, or be really excited about either but hard to get past the short arms.

I would be less likely to take more of a center approach like Eric McCoy earlier, because Lamont Gaillard could be around later and is pretty close together ability. I made a piece at Gaillard earlier this year, and he has now moved draft boards from the 7th round / UDFA area to the late 3rd / 4th round area now.

He doesn't have McCoy's arm strength (measured by benchpress reps), but he has longer arms (33 1/2 ") and is about the same size and also brings very competitive toughness.

Greene is 6 "5", 335 lbs., With 35 1/4 "arm length and was a 3-year-old starting to Gophers at the left tack. He had a meniscus problem in his knees that prevented him from make Combine or Pro Day training so that these measures are up in the air.

But on tape he shows the functional strength and athletic ability to at least be an upgrade on swing tackle, and with some improved hand techniques can be a good one Starting in the NFL according to scouting reports, he also plays with very competitive hardness.

There is a question of whether he is best at tackling or guarding, but Greene looks like a guy who is ready for the NFL in terms of functional strength and athletic ability, but could use some additional tea There is a lot to like about Greene as a 3rd round or later choice that could be a starter rather than later with good coaching.

Ideally, it would be good if the Vikings drafted 2-3 of these guys. Looking at the depth around here, I could see the Vikings using a first round at a guy like Risner or Williams, so come back in the 3rd and 4th round to get Greene and Gaillard.

What do you think? What is the best realistic combination of offensive linemen that the Vikings could make this weekend?