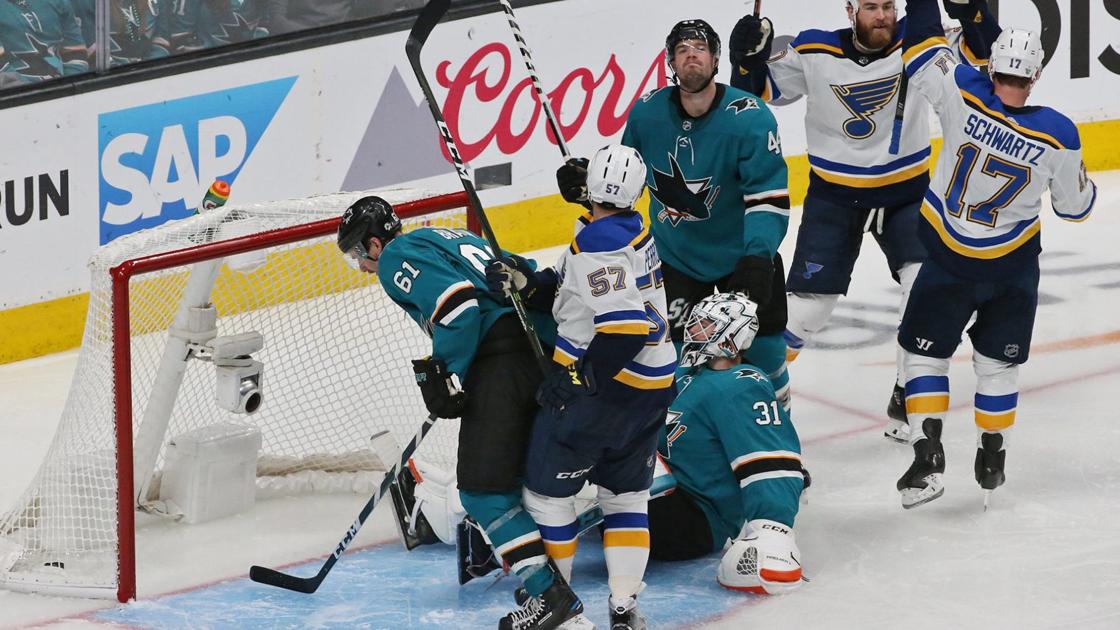 SAN JOSE, California – Since the Blues switched the wicked days of BC (before the chief) to the sun's shadow of AD (after December), they have assembled an impressive collection of victories that could depend on their best argument.

9 played his perfect game here on Sunday in a 5-0 dismantling of the sharks.

Consider the circumstances. Understand the nuance. Let the scene sink it.

"We'll talk about it when we get there," replied Alexander Steen when asked to move within a victory to clear the Blues first Stanley Cup final appearance since 1970.

Fair enough because there is so much to discuss from this dominance.

What about the start when goalkeeper Jordan Binnington responded to an early scare by Evander Kane's ricochet out of the post by rescuing the next five shots that came to fast-paced fashion.

Or should we end up at the end when Blues owner Tom Stillman saw a clip of firmness at the Enterprise Center, where more than 10,000 Blues fans celebrated a franchise-best 11th win after season in a year. 19659002] "They threw their hats!" Stillman said.

You should have seen Jaden Schwartz's laugh when he heard his second hattrick of the postseason, which got a cleanup in Louen. And to the tab on the SAP Center, which forwarded a Blues hat to the ice despite Shark's fans fans to intervene, well done.

Schwartz now has more goals this season (12) than he had in the worst regular season of his career (11). It must be difficult to find a better microcosm of this team. But the thing is, it's not hard. Not at all. You cannot throw a dart on this list without hitting the perseverance personified.

Each player has had his postseason moment. We have wondered what can happen if everyone clicks at once. No more wondering.

Binnington was as invincible as his San Jose counterpart Martin Jones and his suspect glove was exploitable. Sharks could have been up with five six minutes in. Instead, San Jose dragged on thanks to Oskar Sudqvist, who took advantage of an Erik Karlsson turnover. There was the catalyst of a fourth line again. At times it has been Blues best. The same could be said for the third. Not Sunday.

We said that Blues & # 39; biggest stars should rise in this series. Check. Each member of the top line had a postcard on the postgame media room stage on Sunday.

Vladimir Tarasenko, who was publicly challenged by coach Craig Berube after a noisy Game 1, was a tornado of physical and helper and the most beautiful penalty shot you want to see, a rocket that left Jones, grabbed the air. The top line produced four goals, three assists and a masterful bullying by Brayden Schenn, who in the second period wrapped Brent Burns and Justin Braun in a main lock and held his head together. The only thing missing was a swirly.

Remember that the second period stalked, which has often threatened Blues since January and almost tracked them in Game 4? It was nowhere to be found on Sunday, replaced by Blues out-shooting Sharks 20-6 for a period that secured a three-goal lead. Bravo.

A quick check of special teams showed that Blues killed two penalties and scored on the only power game that really mattered, a five-to-three advantage that secured a 4-goal lead.

Shark's frustration rose with the period. San Jose's anger grows along with its welts. The bruises that Blues has put on their opponents, as Game 1 pays dividends.

Karlsson is no longer wise about the fact that Blues cares more than hockey. He fails to hide his groin tenderness to the point that San Jose coach Pete DeBoer admitted to starting him Sunday was a mistake. Blues captain Alex Pietrangelo's thunderous hit at Joe Pavelski knocked the Sharks captain out of the game. Tomas Hertl also left his wounds early for the ice.

DeBoer complains harder than ever about the blues' physical character, which is humorous because he was the one who deployed Michael Haley in the game to start a fight.

Which team was it again that cares more about hitting than hockey?

I would call DeBoer to the most confused man in the building, but there were Shark's fans – before leading to the exit by 13 minutes back – who had the nerve to cut falling remarks against the on-ice officials. Apparently they forgot their team won Game 3 thanks to a non-call on Timo Meier's hand card. It is the same Meier who is praised as the happiest player in the league, the one who spent Sunday's final minutes, and hunting a cheap shot at Pietrangelo's knees.

The sharks lose their toughness no matter how many tribute to Joe Thornton NBC shows. Blues are at their best. Bruins waiting.

"We are very close right now," said Blues forward Pat Maroon. "The boys know it. It's upside down. But we know it's also a good hockey team over there. They won't give up."

Another game like this, and the Blues' next flight goes to Boston .