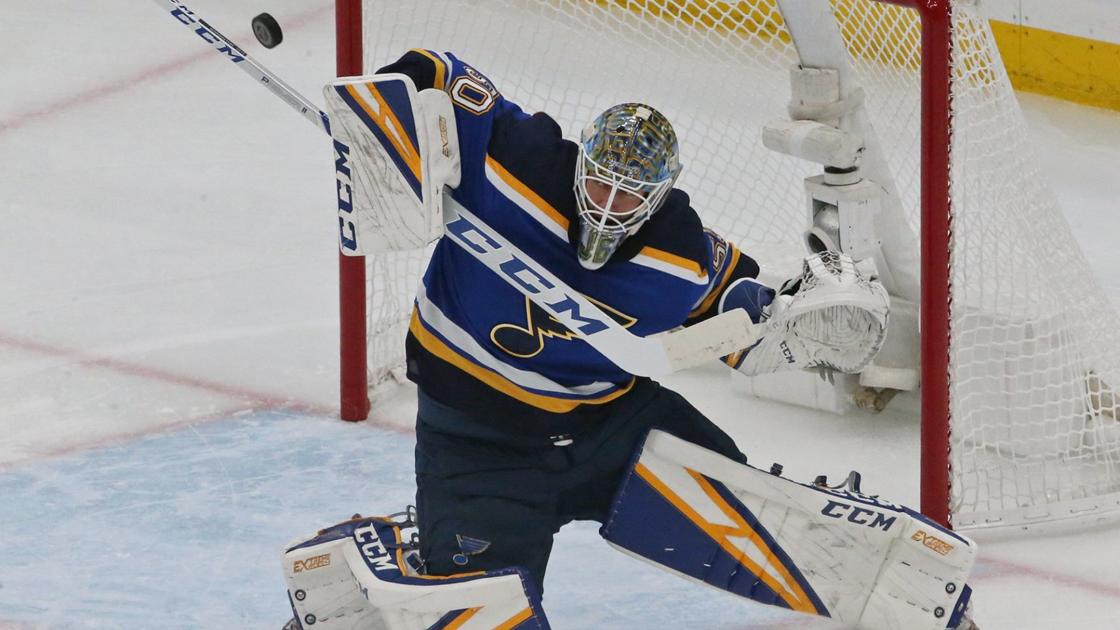 No, you weren't dreaming.

Like the Sharks and the Stars and the Jets , it failed.

These Blues changed coaches, changed goalies, and, in front of a sold-out Enterprise Center crowd on a stormy day, changed perceptions of an organization that had been blocked from the Stanley Cup finals since 1

Hey buddy, they're still here. And there, crying in the hallway near the dressing room, was Kelly Chase, the man who first read that blues rallying cry. And there was little Laila, the Blues' superhero, interviewing Alexander Steen. And there was Bobby Plager in his playoff beard, celebrating for two.

A crowd of 18,684 assembled beneath a scary sky, and that's not counting the mass at Ballpark Village. The hockey goods stirred over our downtown. Tornado sirens sounded. Lake? Those who could not be watched from their basements – if their reception didn't cut out. The storm calmed. The sirens stopped. Blues legends Chris Pronger, Brett Hull and a long list of teary-eyed, well-oiled albums tried to make sense of a 5-1 Blues win. Current Cardinals Adam Wainwright, Yadier Molina and Kolten Wong cheered like Average Joes. Old friends Chris Long and David Freese popped up on the big screen, stirring roars. It was a movie in real life, and it just now reached the best part.

"There is still one more opponent to beat," Vladimir Tarasenko said.

"The big prize is still ahead of us," added general manager Doug Armstrong.

Boston beckons. The focus had shifted to the Bruins before last call at Enterprise Center. Here's why the Blues are bound for Beantown. . .

to Game 1 of these Western Conference Finals, when the Sharks won and almost sneered at the Blues' attempt to smear them in the loss. High-scoring San Jose defense man Erik Karlsson, a specific target of the Blues due to his recent missed time with groin and leg injuries, said in a post-game press that the Blues seemed more interested in physicality than hockey. Some media members ran with the story. The blues were too worried about being too physical! No, they're not. While they made a point to shift their focus to hits and puck possession instead of just hits, the blues never really scaled back their intention of making San Jose physically uncomfortable.

It worked. The Sharks played Tuesday's Game 6 without Karlsson, Tomas Hertl and captain Joe Pavelski. All had been knocked out of the game because of hits delivered by the Blues, because of injuries complicated from hits delivered by the Blues. The Blues out-hit the Sharks 208-182 through six games. And through the first four games, the Blues out-hit the Sharks 148-99. Alex Pietrangelo's Game 5 hit on Pavelski knocked him out of the series. Ivan Barbashev's Game 5 hit on Hertl knocked him out of the series. The blues were ruthless towards Karlsson, who went from the physicality to the grimacing on the bench in Game 5, and absent entirely in Game 6. Sammy Blais had a series-high 31 hits. She was smashing someone every time you blinked. The Sharks broke down as the series aged. It was too late at the time they started hitting.

"I think the two hardest, heaviest teams are in the final," San Jose coach Pete DeBoer said Tuesday. “Everybody talks about skill and speed, and there's room for all these small players, but I don't think it's an accident. There's no space. They're heavy. They're hard. They're organized. ”

"I didn't want to displace any of our nine," Armstrong said. “We believed in what (Oskar) Sundqvist was doing. We believed in (Ivan) Barbashev. So it just felt like this group had something going on. We felt they had earned the right to see how far they could take it. ”

In this series, the Blues got goals from 12 different players. Twelve! Jaden Schwartz, who had the worst regular season of his career, paced the group with four. Three Blues – Tyler Bozak, David Perron and Vladimir Tarasenko – each had three. Ivan Barbashev and Oskar Sundqvist chipped in two a piece. Then six others came up with one, from Robert Bortuzzo's game-winning backhand, to Brayden Schenn's Game 6 drought buster. The Blues 'third and fourth lines remain game changers, and the fourth line's bottling up of the Sharks' top line was a major factor. A whopping 17 Blues scored a point in this series

Another example: Sundqvkist, a fourth-liner, leads all Blues with a postseason plus-minus of plus-7. Just don't call him a fourth-liner. The Blues have begun to refuse to label their lines, because each has such an important role. It would sound like it actually was.

"We play all four lines," Tarasenko said Tuesday. “It's been every game. Team wins. Everybody does their job really well. There's no one, two, three, four. It's just our team. We get four wins, we move on, and that's what matters. ”

When Tarasenko's quiet Game 1 asked about his postseason performance, both Berube and his star player had decisions to make. Berube could stick up for his player, or challenge him publicly. And Tarasenko had to decide how he would respond. Berube did a bit of both, praising Tarasenko's ability but also asking him for more. The coach played it perfectly. So did Tarasenko, who ratcheted up his game, was his play away from the puck, and as a result broke through his scoreless spell.

After the Sharks limited one shot in Game 1, he had more than three shots per game. game about the following five games. He scored from scoring one goal in his last eight postseason games to scoring three goals and dishing four assists over the next five games. He was a plus-3 player after Berube challenged him. Tarasenko's 16 hits in the series tied for fourth among Blues players. When No. 91 is active and shooting, good things happen for the Blues. His coach pressed the right button, but the server was credited for rising to the occasion and silencing the conversation about his impact in big games.

4. Binnington is a cold-blooded closer

For the third time in many postseason series, Blues rookie, goalie Jordan Binnington refused to allow more than two goals in any of the series' final three games. He now has a 7-2 record through the final three games of each round. He has stopped 235 of the 247 shots he's faced in those games. During the Blues wins against the Sharks in Game 4, 5 and 6, Binnington stopped 75 or 77 shots.

5. Hand pass? Blues moved past it

It could have broken them

Not long ago, something like the on-ice officials missing Timo Meier's illegal hand pass before the Sharks' game winning overtime goal in Game 3 could have derailed the Blues. But Berube's bunch has developed a habit of sidestepping potholes instead of wallowing in them. The sharks were blessed with lots of luck during their run, got defensive after the non-call. The Blues simply shrugged it off and turned into a steamroller. They were 3-0 after the hand pass. They outscored the Sharks 12-2 after the missed call.

It is this quality, a remarkable ability to turn the page, that has the blues headed for Boston with room to improve an already amazing comeback story.