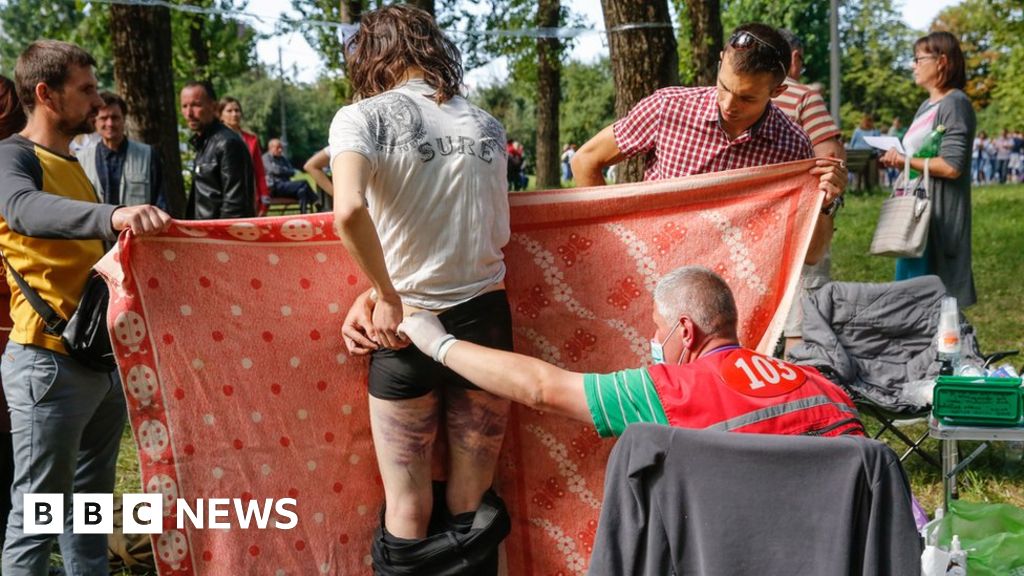 7;s main opposition figure, Svetlana Tikhanovskaya, has called for an end to violence against protesters, while calling for more rallies over the weekend.

Although detained for seven hours after Sunday’s controversial presidential vote, Tikhanovskaya has fled to Lithuania.

When the EU lost new sanctions, Belarus promised to free all detainees.

Approx. 6,700 since the protests broke out Sunday night.

Belarus sees a sixth day of protests since the presidential election, rejected by the EU and the US as neither free nor fair. European Commission President Ursula von der Leyen has supported further sanctions “against those who violated democratic values ​​or abused human rights”.

Alexander Lukashenko, who has been in power since 1994, was declared victory by the electoral authorities, but Ms Tikhanovskaya’s supporters insist she won.

In her first statement in several days, the main opposition candidate said that where votes had been correctly counted, she had won support from 60% to 70% rather than the 10% given to her by the election committee.

Calling on Belarusian mayors to hold “peaceful mass rallies” on Saturday and Sunday, Ms Tikhanovskaya said: “Belarusians will never want to live with the previous government again. The majority do not believe in his victory.”

The BBC has spoken to several people, including teenagers, who have described being beaten.

“They beat people violently, with impunity, and they arrest someone. We were forced to stand in the yard all night. We could hear women being beaten. I do not understand such cruelty,” a man said as he showed the BBC his bruises. .

In a statement on state television, Senate Spokeswoman Natalya Kochanova said the president had ordered an investigation into the mass imprisonment of protesters and that more than 1,000 had been released.

All remaining detainees were to be released Friday morning, Deputy Interior Minister Alexander Barsukov said while denying that prisoners had been abused.

Released prisoners shared photos on the messaging app Nexta, showing their bruised and swollen bodies, including injuries to the back and buttocks, which the alleged were caused by police.

“Former detainees have told us that detention centers have become torture chambers where protesters are forced to lie in the dirt while police kick and beat them with truncheons,” said Marie Struthers, Amnesty International’s director for Eastern Europe and Central Asia.

In a sound shared by a BBC journalist, screams could be heard from inside the Okrestina detention center in the capital Minsk.

Separately, a group of five UN human rights experts said the security forces’ response to peaceful protests had been harsh, with frequent use of excessive, unnecessary and critical force.

“The authorities only seem interested in spreading the protests quickly and arresting as many people as possible,” they said in a joint statement.

What will the EU do?

EU foreign ministers will meet on Friday to consider possible sanctions against Belarus over the crash. The bloc has imposed sanctions before, but eased measures several years ago when President Lukashenko released other detainees.

Czech Prime Minister Andrej Babis said sanctions should be imposed “until free and transparent elections are held in Belarus with the participation of international observers”. He said he had the support of Poland’s Mateusz Morawiecki, who said he would put forward a “solidarity with Belarus” plan on Friday in the Polish parliament.

The EU has already rejected the presidential vote as “neither free nor fair”, an assessment backed by US Secretary of State Mike Pompeo. The President of Lithuania has said that Mr Lukashenko is no longer the legitimate leader of Belarus.

Ahead of the EU emergency meeting, Belarus’ Interior Minister Yuri Karayev said he was taking responsibility for people being injured during the protests and that he would apologize to those captured by the violence. Foreign Minister Vladimir Makei said his country was ready for “constructive and objective” talks with other countries.

Observers said the official statements and the release of the detainees suggested a more conciliatory approach following public outrage and international condemnation at the police response.

Officials have confirmed two deaths during the unrest. A protester died during a protest in Minsk on Monday, while a man died after being arrested in the southeastern city of Gomel on Wednesday.

Shock over the brutality of the police as the testimonies go

Nikita Telizhenko, a journalist on the Russian news site Znak.com, published a harrowing report of three days in jail. Now back in Russia, he describes people lying on the floor of a detention center, stacked on top of each other, in a pool of blood and excrement. They were not allowed to use the toilet for hours or even change position.

He says he saw seriously injured people with broken limbs and severe bruises, not only left without medical help, but kicked and beaten more by the guards.

Telizhenko’s testimony is confirmed by countless posts on social media – photos, videos, stories. I spoke to an American woman who was visiting her Belarusian boyfriend in Minsk – he was detained for no apparent reason. Not only had he not protested, but he was sleeping in bed when police arrived at his apartment, kicked the door down and led him away.

More on the protests in Belarus

Belarusians returned to the streets of several cities on Friday for a sixth day of protests since Sunday’s election, opposition media reported.

Footage posted by messaging app Nexta on Thursday night appeared to show protests continuing in the streets with protesters chanting “get out”.

Tearful relatives were gathered outside a prison north of the capital Minsk in hopes of being reunited with their loved ones or getting information about their whereabouts.

Several strikes have been reported at state-owned factories, with workers opposing violent treatment of protesters. Hundreds of workers were seen walking out at truck manufacturer Belaz in Zhodino northeast of the capital.

Workers in Minsk and Grodno in the west also organized strikes and walkouts. Thousands of women carrying flowers formed “solidarity chains” in Minsk and other cities to protest police brutality.

Video footage shared on social media showed opposition figure Maria Kolesnikova joining the female protesters in Minsk, having a lot of flowers. She was one of three women who pooled their resources to lead the opposition. The other two, Mrs Tikhanovskaya, who is one, have left the country.

Mrs Tikhanovskaya, 37, was a stay-at-home mom until she took part in the race after her husband was arrested and blocked from registering for the poll.

She became Mr Lukashenko’s toughest opposition challenge for years, leading large rallies ahead of the vote.

Facebook has more users in India than anywhere else. It now has to do with a hate speech crisis