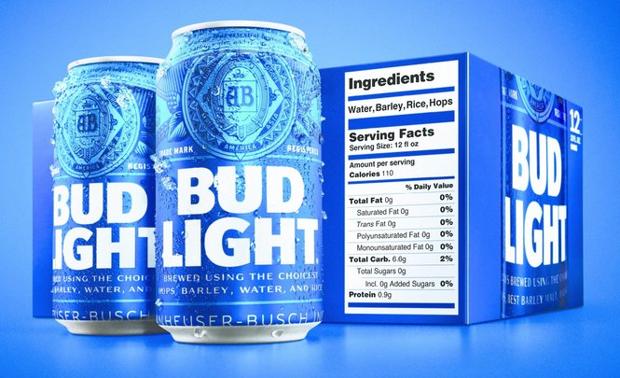 While I typically dedicate this space to craft beer, every so often I like to talk about larger industrial brands.

Let's face it, a lot of (most, actually) people still drink one or more of the bigger beers , and would be like an ostrich with its head in the sand to simply ignore them.

The reason I'm writing about one of them today is comming it for doing something that should be required of all beers: listing ingredients and serving facts on their labels.

Budweiser announced Friday it was doing so with Bud Light

Now I realize some folks' first reaction will be wondering why anyone would need to know what's in a beer.

To me, any transparency is welcome on any food or drink. No jury was ever convicting of being particular and careful about my diet or intake, but sometimes I did like to know what was used to create whatever sustenance I'm shoveling into my maw

With most of the beer I drink, I know pretty much what is in them. I drink a lot of local beer and have sometimes even talked to the brewer about it, just of my curiosity about beer and what was used to create a certain flavor profile.

While I'm not a strict adherent to the Reinheitsgebot , the 1

516 German purity law that mostly restricted beer to the basic ingredient listed above (although yeast was not included as brewers didn't know it existed yet in 1516), I don't usually want a lot of extra stuff used for the beers You drink. Most good brewers can make some amazing creators that make seem like extra ingredients were used.

In short, I like beer that tastes like beer, first and foremost. Beer alone has so many flavors that I don't need any baubles and bangles. If you like that sort of stuff, that's great. I have nothing against those beers. I just don't want to look them out.

But I would like to know if they are using other ingredients, just out of curiosity, if nothing else. So kudos to Bud for doing this. In addition to the ingredients, the packaging will also include: serving size, calories, total fat, saturated fat, trans fat, carbohydrates, sugars and protein.

Those numbers beyond the basic ingredients are good to know for a lot of people who are engaging in some sort of health regimen or another. While it would be sort of ridiculous for anyone on a low-carb diet to drink beer to start with, I guess it's helpful in some way. And most beers don't have a lot, if any, fat, but certain ones have some. Some people also count calories, so that information is also important to a swath of dieters.

In the end, I think it's just good to have more information than less. It's one of the reasons I got involved in journalism in the first place. My love of the arts made me transition to feature writing many years ago, so I rarely do any news reporting anymore. But every so often I've been called upon so, and it can be a thrill to put that hat on again. So yeah, more info and transparency still rate highly in my book.

I hope Budweiser does it with all its beers and other breweries follow suit.

Beer labels can be artistic, but there is no reason for them not being educational as well.
Source link