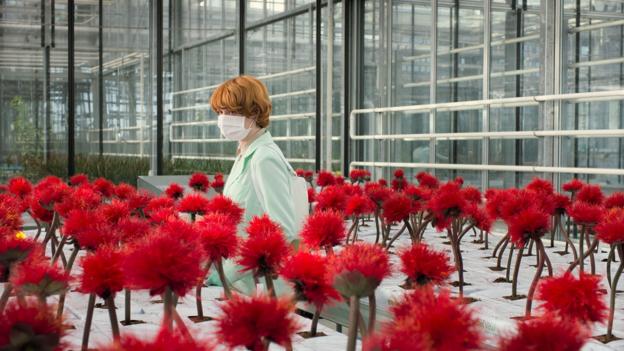 Imagine if Frankenstein was a woman. That's the basis for Little Joe, a new film that played at this year's Cannes Film Festival.

British actress Emily Beecham picked up the best actress prize at the festival's award ceremony for her depiction of Alice, the female scientist who creates a new wide or anti-depressant plant.

For Austrian director Jessica Hausner (Amour Fou, Lourdes), recreating the Frankenstein story with a female lead allowed her to explore contemporary associations about genetic modification, corporate control and motherhood. "In my film, the character Alice is a scientist, and she creates a sort of monster, it's a plant, a red flower," she explains in this clip from Talking Movies. "But she actually creates another monster, if you want, which is her child. The film is about the ambiguity of her motherly love, and her focus on her work. ”

Love movie? Join BBC Culture Film Club on Facebook, a community for movie fanatics all over the world.

And if you liked this story, sign up for the weekly bbc.com features newsletter called "The Essential List". A handpicked selection of stories from BBC Future, Culture, Capital and Travel, delivered to your inbox every Friday.