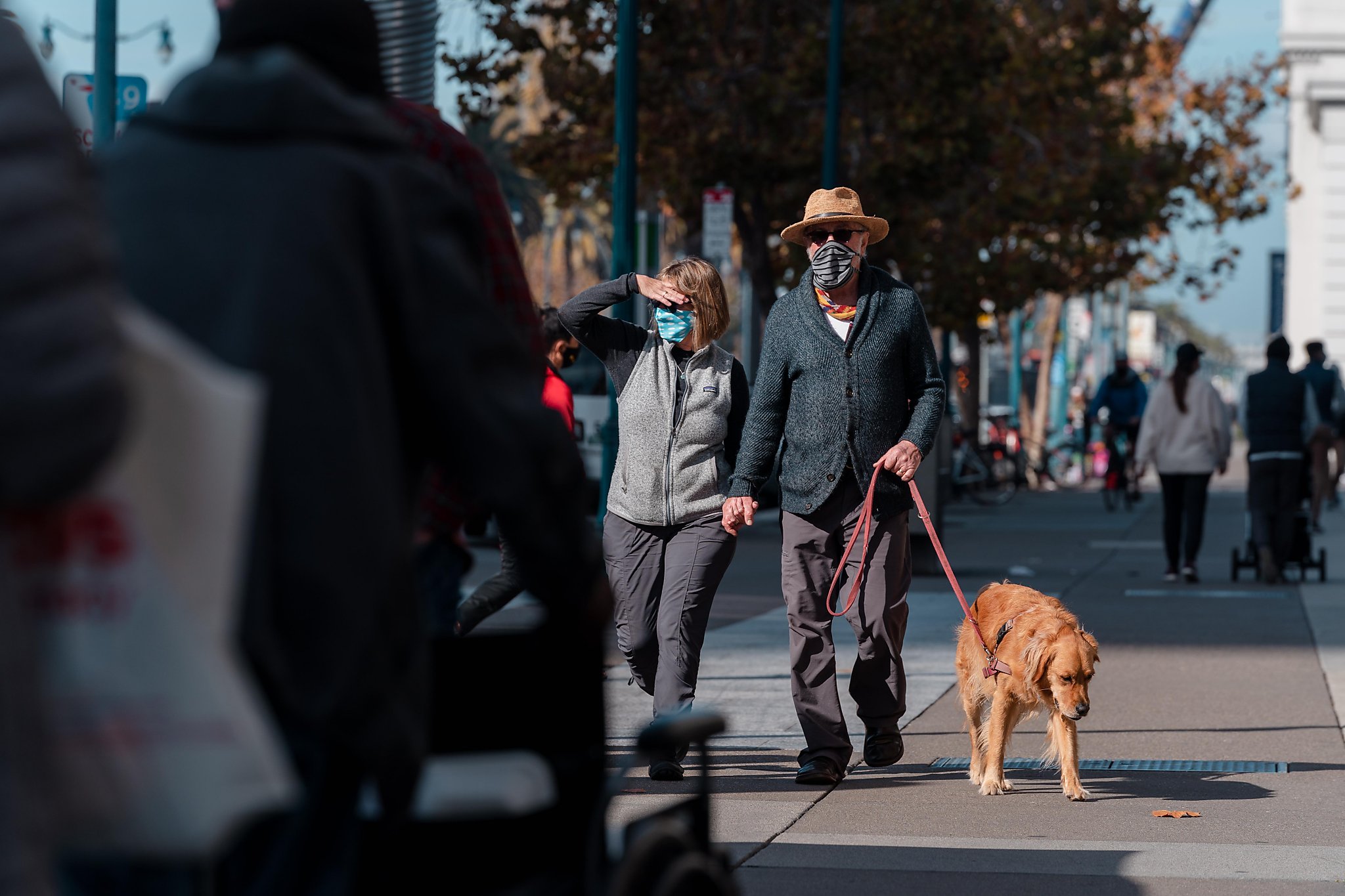 Skyrocketing coronavirus cases are putting high demand in Bay Area hospitals, and some counties fear they could exceed capacity in the next two to three weeks, especially if they see a further increase in cases after Thanksgiving, public health officials said Friday.

The grim warnings came when San Francisco officials said they expect the city to land in the state’s most restrictive purple level early next week, perhaps Sunday. It would place the city under California’s new curfew and force almost all indoor activities to shut down.

Weekly new cases of coronavirus have more than tripled over the past month, Dr. Grant Colfax, director of the San Francisco Department of Public Health, in a news briefing. Models suggest that if the current wave continues unabated, “we could conceivably have hundreds of people in the hospital in late December or early January.”

Santa Clara County Health Officer, Dr. Sara Cody, said the county reported 407 cases on Friday more than at any other time in the pandemic, and hospital admissions have increased by 50% over the past week. If this growth rate continues, the county will exceed the hospital’s capacity in about three weeks, she said.

“Cancel your vacation plans,” Cody said during a news conference. “The choices we each make over the next two weeks can mean the difference between the capacity of the hospital to suit us all and not enough.”

Daily cases of coronavirus across California and the Bay Area have doubled over the past month, and the state has passed 10,000 cases in one day five times this week – peaks not seen since the summer’s rise. California reported a record 13,422 cases Thursday. The state had 12,807 cases Friday. 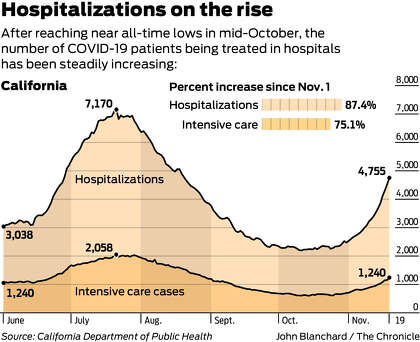 However, this wave is far more worrying than the summer wave. The growth rate is already steeper, and Thanksgiving alone could lead to an even more dramatic increase in cases over the next few weeks. Public health officials have made increasingly urgent requests for people to stay home during the holidays and not gather.

The latest curfew is intended to try to curb some of this activity. Public health officials say a complete lockdown in the form of a new shelter-on-site order is still an option.

“We’re on a rise that has the potential to overwhelm our local healthcare system … and force us back to shelter in place,” Colfax said.

He said he expects the state to move San Francisco to the purple level because of the rapidly escalating rates. Indoor operations such as museums, cinemas, gyms and places of worship close within 24 hours. The curfew, which requires non-important activities to stop between kl. 22 and at 5, will take effect two days after the transition to purple.

The new restrictions will also include a ban on indoor social gatherings, which is currently allowed for a maximum of three households. Provided the new restrictions land before Thursday, it would force Thanksgiving gatherings – which the city has nevertheless severely deterred – outside.

As of Friday, 41 of 58 counties in California, accounting for nearly 95% of the state’s population, were in the purple level. Government Gavin Newsom issued the month-long curfew for all purple counties on Thursday, and it takes effect at. 22 Saturday. Six of the nine Bay Area counties are currently in the purple tier. 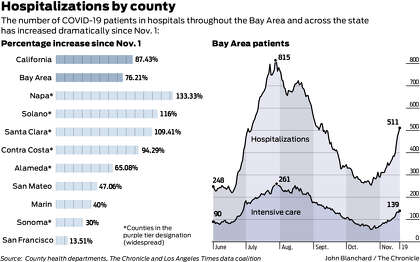 Public health officials hope the curfew, along with other efforts to deter people from gathering or interacting with them outside their homes, will help curb the number of new infections and prevent hospitals from being overwhelmed – something Bay Area has managed to do during previous pandemic waves. Even when admissions peaked around 800 in the Bay Area in July, there was still plenty of capacity.

But just as cases are exploding at an unprecedented rate, hospitalizations are also picking up. And the number of hospitals tends to lag 10 to 14 days after the cases, so the new infections reported now are not yet a burden on the health care system.

As of Thursday, 511 were hospitalized with COVID-19 in the Bay Area and 4,755 in the state. Both figures increased by approx. 40% from the previous week. The number of intensive care units rose by about 35%, with 139 patients in the Bay Area and 1,240 across the country on Thursday.

Aside from the expected increase in COVID-19 patients, hospitals are already fuller than they were in the spring and summer, healthcare providers said. Hospitals are trying to catch up with patients who delayed care earlier in the pandemic, and this time they have not stopped optional procedures or advised people to abolish routine appointments.

“We are certainly concerned that hospitals are starting from a place with more utilization and adding to it,” with COVID-19, said Dr. Ahmad Kamal, director of health system preparedness for Santa Clara County.

Dr. Yvonne Maldonado, an infectious expert at Stanford, said the medical center is “nowhere near overuse” at the moment. But she is concerned about the increase in patients, not only from COVID-19, but from influenza and other seasonal respiratory viruses. And like Kamal, she noted that the hospital already has less capacity than earlier in the year.

Bay Area’s public health officials are not alone in California to worry about the demand for hospitals. This week, at the southern border, Imperial County activated an “alternative nursing home,” and a patient was transferred to a neighboring state because hospitals ran out of space.

Frontline healthcare providers said they are watching as hospitals fill up in other parts of the country, wondering if that is their fate. Bay Area has avoided exceeding its hospitals twice before in previous hikes – they are hoping the region can do it again. But the effort feels higher now, said Dr. Jahan Fahimi, an emergency physician at UCSF.

A record 82,000 people were hospitalized with COVID-19 in the U.S. from Wednesday, according to the COVID Tracking Project. Ten states currently report extremely high hospitalization rates, meaning people with COVID-19 make up more than 15% of all patients, according to federal reports. Dozens of counties across the country have had to open non-hospital locations to relocate less critical patients and provide space for the sickest people in intensive care.

Healthcare providers in some places have been asked to continue working, even after testing positive for the virus.

“If the other states and other locations are somehow a barometer of what we are striving for, it looks worse than the first and second time,” Fahimi said. The warning is that the Bay Area, and especially San Francisco, did very well compared to these other places. I’m hoping we’m still doing well. But that does not mean it will be good. ”