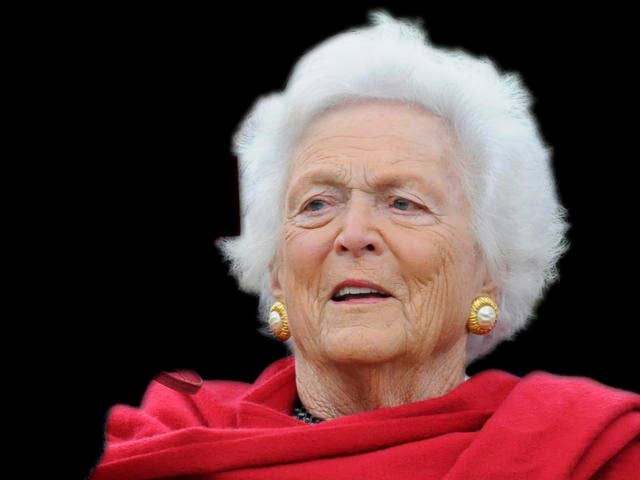 Former first lady Barbara Bush became honest in the last months before her death and accused President Trump of her heart attack and said she did not consider herself a republican.

Bush died in April 2018 at the age of 92, shortly after her family announced she was in poor health. Her husband, former President George H.W. Bush died a few months later in November at the age of 94.

According to an excerpt from the forthcoming book "The Matriarch: Barbara Bush and the Making of an American Dynasty," author Susan Page, also the USA Today's Washington bureau chief, asked the former first lady in October 2017, if she considered herself a republican. Bush said she did. But when Bush asked the same question in February 201

8, she had another answer.

"I would say no today," she replied.

Barbara Bush campaigns for his son Jeb Bush in New Hampshire on February 4, 2016.

Bush was reluctant to fight for his son Jeb when he launched his 2016 presidential bid because she saw firsthand from her husband and other son, George W., how the "brutal" presidency – and the way to it – could be . She said she decided to fight for Jeb because he was her child and "because she was worried about Trump," wrote Page.

Jeb Bush ended up dropping out of the race after a poor show in the South Carolina primary.

In 2016, Barbara Bush suffered what she called a "heart attack" and accused the episode of the presidential campaign and Trump's constant ridicule of Jeb during the electoral cycle.

But Bush's criticism of Trump dates back to the 1990s. Side read some of Bush's diaries and found clippings from Trump's separation from his first wife Ivana.

"Trumps is a new word, both", she wrote in her diary. "Trump now means greed, selfishness and ugly. So sad."

Later, the former first lady spoke of Trump's candidacy and surprise of his followers.

"I don't understand why people are for him," she said.

GEORGE AND BARBARA BUSH THROUGH THE YEARS

Bush wrote in his diary that she "couldn't vote for Trump or Clinton" and ended up writing Jeb's name on the poll.

Before Trump won, Bush had a note ready to send to Bill Clinton, who said, "Welcome to the First Ladies Club" as a joke. But she "woke up and discovered my horror that Trump had won."

A friend of Bush sent her a "Trump Countdown Clock" that showed how much time there was in the Trump Presidency. She kept the gag gift on the bedside table.

After Trump won, Bush met the newly elected president and wrote in his diary that he was "very clever." She also wrote letters to first lady Melania Trump and second lady Karen pence.