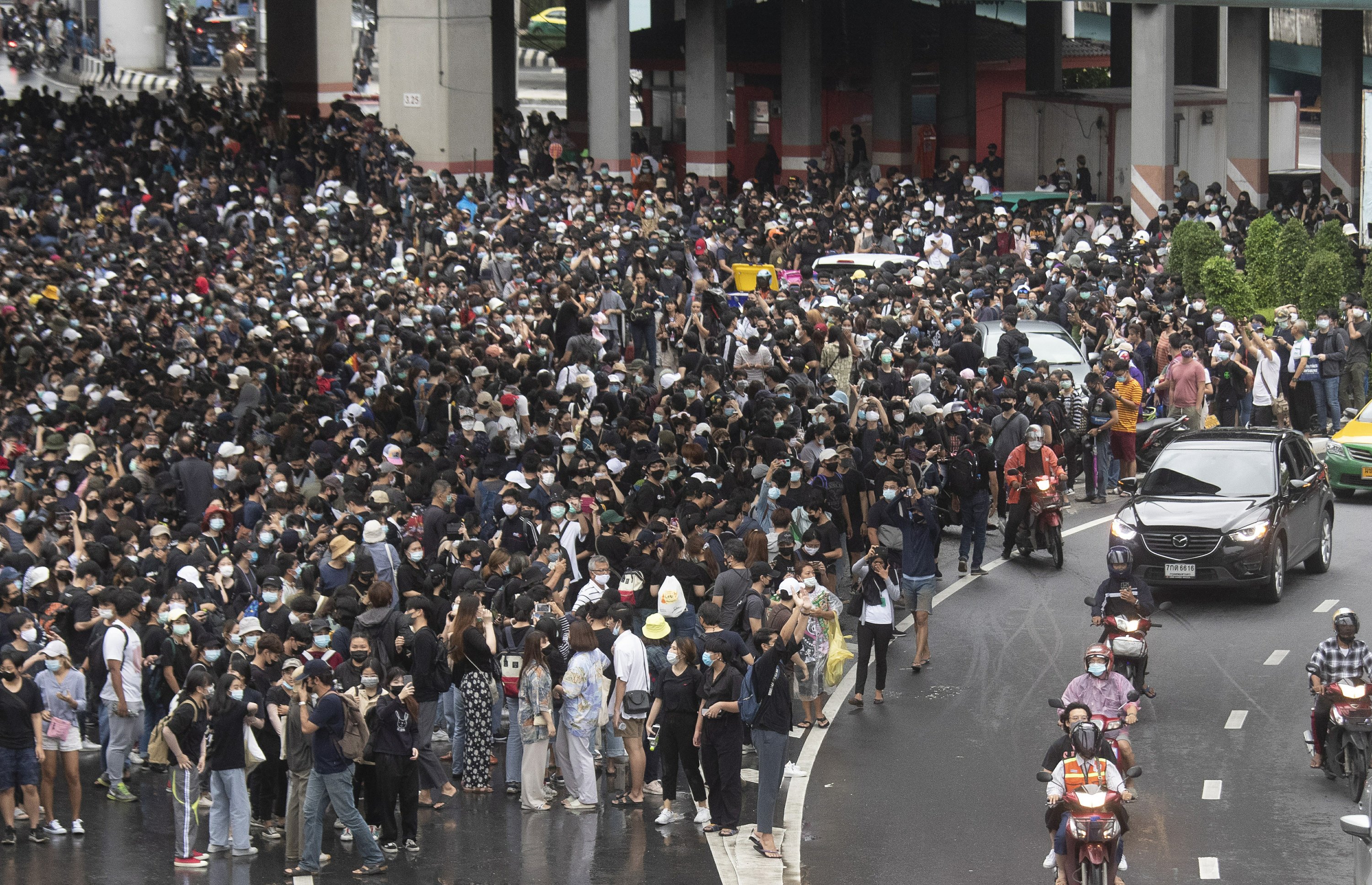 The protesters have done their best to evade the authorities by using social media to gather supporters before the police have time to block them. The government has announced plans to sue Twitter and Facebook accounts announcing the protests, but new calls for action were announced on Saturday.

Protesters are urging Prime Minister Prayuth Chan-ocha to step down, the constitution to be amended to make it more democratic and the nation̵

7;s monarchy to undergo reforms. The protests have been called despite a state of emergency imposed on Thursday.

All stations in Bangkok’s elevated Skytrain mass transport system were ordered closed Saturday afternoon in an attempt to counter protests. A line of the underground MRT system was also closed and police blocked off several roads. Organizers had urged their followers to meet at Skytrain stations pending further instructions.

Groups of protesters gathered at many of the stations that were closed and actually established a protest presence throughout the city. In a further twist, the organizers issued new advice for followers to gather at three stations outside the city’s central area, where access was easier, especially for people living in the suburbs.

Police on Friday also had tried to block the protesters but failed when protest organizers announced a last minute change of venue.

Friday’s demonstration was broken up by a large contingent of rebel police backed by water cannons after at least 1,000 people gathered. It was the first time that the authorities used such a powerful tactic against the student-led protests. Both Thursday’s and Friday’s protests were held in normally busy areas of central Bangkok.

“The government has pushed us to the cliff, and now we have nowhere to go. We have to stand right now; if not now, then we do not know when, ”said a protester, a 26-year-old who refused to give his name for fear of getting into trouble with the authorities ..

Police took control of Friday’s rally site after about an hour, but continued to engage with some stragglers. Flash protests were launched in solidarity at several universities around the country.

“From the dispersal of protesters on the evening of October 16, we have learned that the government and the military have established themselves as the enemy of the people,” said a statement issued after Friday’s events by the People’s Party, the umbrella organization for the protesters. . Most of its top leaders have been arrested.

The protesters’ call for reform of the monarchy has significantly raised the political temperature in Thailand and has angered many older conservative Thais, for whom any critical discussion of the monarchy equates to treason.

King Maha Vajiralongkorn and other important members of the royal family are protected by a majestic law that has been regularly used to pose critics who risk up to 15 years in prison if deemed insulting the institution.

Prayuth’s declaration of state of emergency said the measure was necessary because “certain groups of perpetrators intended to incite an unintentional incident and movement in the Bangkok area using various methods and through various channels, including causing obstruction of the royal motorcade. “

He referred to an incident on Wednesday that showed some members of a small crowd snatching a motorcade with Queen Suthida and Prince Dipangkorn as it slowly passed by.

On Friday, two activists were arrested under a law on violence against the queen for their alleged part in the incident. They could face life in prison if convicted. They denied any wrongdoing.

28 of the most powerful photos this week