Apollo 11: the fight for the first footprint on the moon | Science 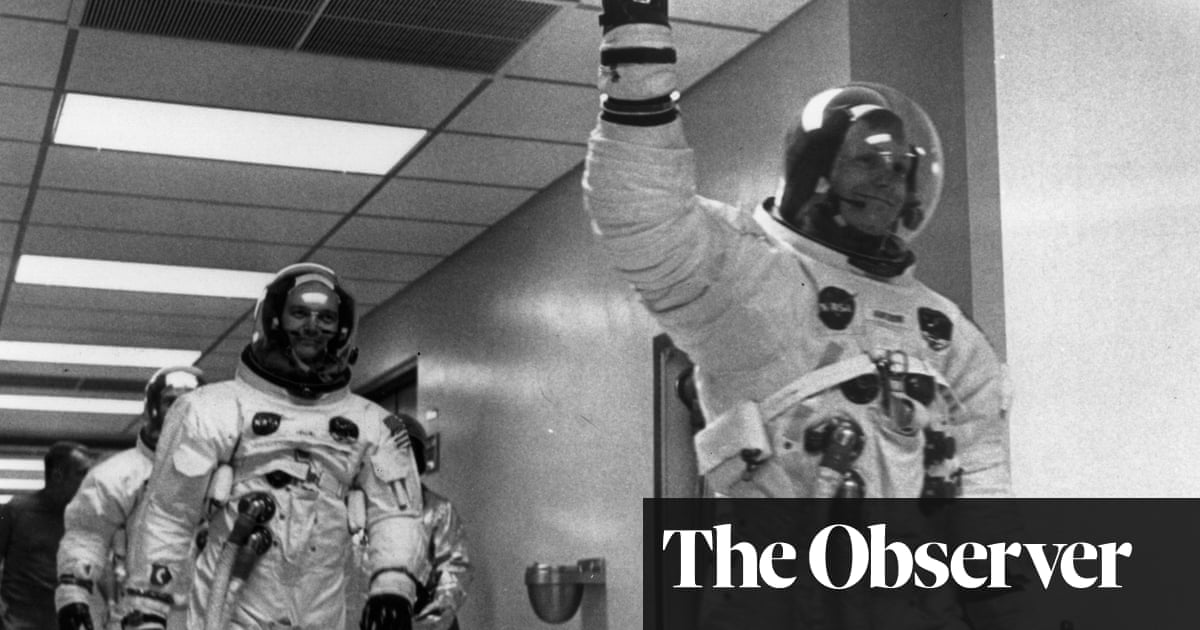 t t was 1969. The last year for President Kennedy's pledge to land a man on the moon and return him safely "before this decade is out". Nasa was not sure it could be done in time. There were, perhaps, going to be only three opportunities before the deadline expired. Michael Collins – in his office in Houston, Texas, and his mission, set for July, might involve a lunar landing. A few weeks earlier, Apollo 8 had taken the first crewed voyage around the moon, and the tasks of the forthcoming Apollos 9 and 1

0 were set. Apollo 9 was to test the lunar landing spacecraft in Earth orbit and Apollo 10 was a full rehearsal at the moon – everything except the landing itself.

got down to the big question: “Which of you gentlemen will be the first man to step out on to the lunar surface?”

It is clear that for the first few months of 1969 Aldrin believed that he would be first. He said he had never given it much thought and that he had naturally presumed it would be him. Nasa's associate administrator for manned space flight, George E Mueller, had several people, including some of the press, that would make the first footprint.

But word started to filter out that it would be Armstrong. Aldrin was angry: Armstrong was a civilian. It would be an insult to the service. He was technically still a member of the air force, though he had not served for 10 years, except to maintain his flying hours. So he approached Armstrong. Aldrin wrote later (although he claimed it was done by his co-author): "He did not know what he was doing, so it was quite historical and he didn't want it. to rule out the possibility of going first. ”Armstrong said that he could not remember the conversation

Aldrin talked to colleagues; for some it was seen as lobbying behind the scenes. Gene Cernan said: "He came into my office at the Manned Spaceflight Center one day in a stork, loaded with charts and graphs and statistics, arguing what she considered to be – that he, the lunar module pilot, and not Neil Armstrong, should be the first down the ladder on Apollo 11. Since I shared an office with Neil Armstrong, who was away training that day, I found Aldrin's arguments both offensive and ridiculous. 19659010] Armstrong was calm and confident. He had no ego. Aldrin desperately wanted the honor and wasn't quiet about it

That was not the way Aldrin saw it. Writing some 40 years later in his book Magnificent Desolation he said that during training in early 1969 he recognized that the great responsibility would fall upon his shoulders. In all the previous Gemini and Apollo missions, the spacewalks were taken by the junior officer while the commander remained inside the space capsule. As of February 1969 that was their plan as well, Aldrin maintained. He said he was soliciting the older astronauts' support. He was simply behaving as a competitive air force pilot. “In truth I didn't really want to be the first person to step on the moon. I knew the media would never let that person alone. ”

On April 14 the speculation came to an end. At a press conference Nasa announced that the plans called for Mr. Armstrong were to be the first man out after the moon landing; a few minutes later Colonel Aldrin will follow. ”Aldrin later said he believed that the layout of the lunar module dictated that Armstrong went out first because he was on the right and the swung towards Aldrin. But that was not the case. It could technically have been Aldrin – they just had to swap pages before they put their backpacks on.

Later, flight director Chris Kraft explained Nasa's thinking. He said they knew damn well that the first guy on the moon was going to be a modern-day Charles Lindbergh. Armstrong was calm, quiet and had absolute confidence. He knew he was the Lindbergh type. He had no ego. On the other hand, Aldrin desperately wanted the honor and was not quiet in letting it known. Kraft added that nobody criticized Aldrin but that they did not want him to be humanity's ambassador. “The hatch design didn't come into it. That was a rationalization, a solace for Buzz. ”

During the first half of 1969 there were times when things didn't go, if Nasa would say, optimally. When Apollo 10 took off in May for the dress rehearsal flight, Armstrong and Aldrin were spending up to 14 hours a day in the landing simulator at Cape Kennedy, flying home to their families in Houston at weekends. Those around them were worried they were training themselves into exhaustion and some wondering how long they could continue. Janet Armstrong said her husband frequently came home with a face that had turned white. By June it was clear that their morals were down.

Nasa's new administrator, Thomas Paine, was also worried. Before he set off for the Paris Air show, he asked the Apollo program director, Sam Phillips, if he was concerned about the crew. Shortly afterwards, Phillips called a flight readiness review meeting using telephone conference calls to ask whether they were pushing the crew too hard. "I am fully prepared to delay if something is not ready," he said. Charles Berry, the director of medical research and operations in Houston, said he was concerned about the crew and would welcome a delay to the mission. Also on the conference call was Deke Slayton, who determined crew assignments. He said that Armstrong had a duty that yes, the schedule was tight and yes, they were exhausted, but the pace would slack in early July and they would rest then. The meeting decided that Apollo 11 could go ahead with the landing and this was announced to the public the day after. Janet Armstrong improved her husband's mood

On July 20th they were in lunar orbit. Armstrong and Aldrin entered the lunar module, dubbed Eagle, to undock and begin the landing. Neither of them had been in the simulator for about two weeks. After the initial part of the descent they performed the so-called pitchover maneuver, allowing them the first time to see the moon below. They didn't recognize anything. They were heading for a big boulder field, flying a trajectory they never had in the simulator. Back to Mission control, capsule communicator Charlie Duke said it was something they had never seen: "You know, he's [justoverthesurfaceatabout400ftandallofasuddenthethingrearsbackandheslowsitdownandthencomesdown”FlightdirectorGeneKranzsaid:“We'veneverseenanybodyflyingitthiswayintraining”

It was Armstrong's moment. The greatest test for a pilot in history. He delivered, and deserved the first footprint.