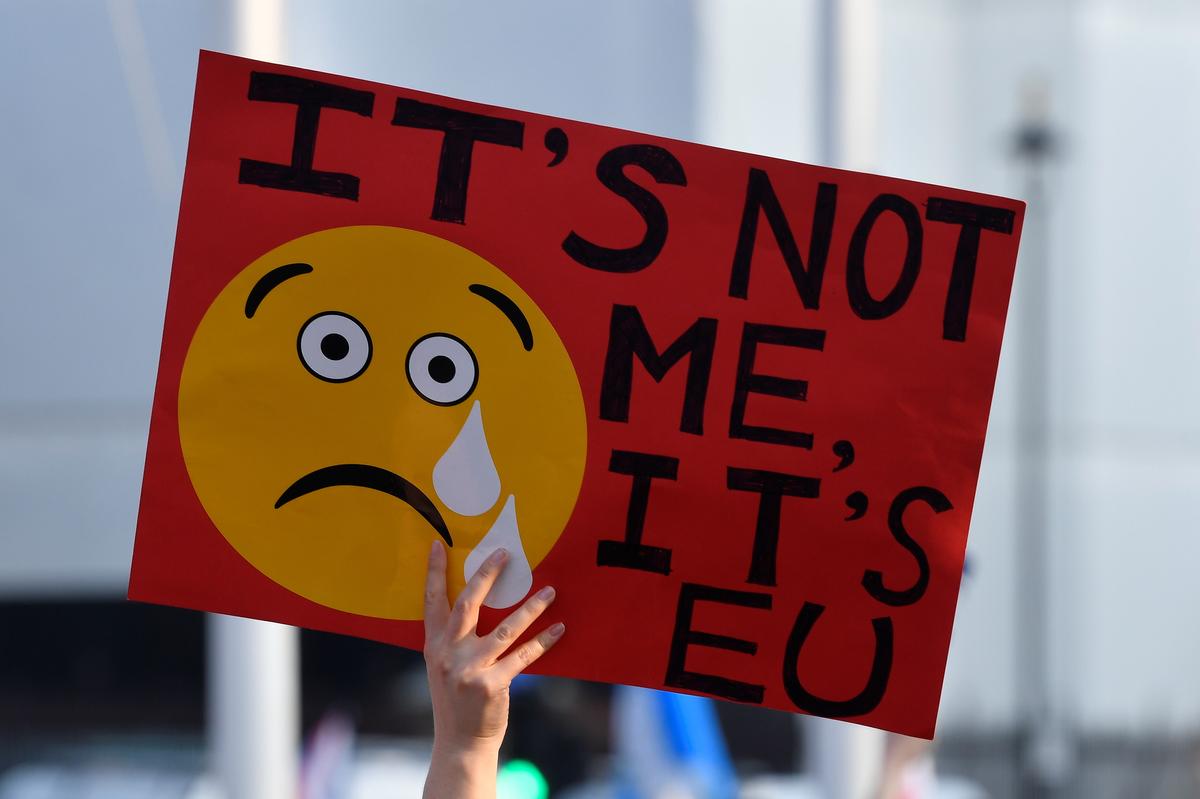 LONDON (Reuters) – Thousands of people opposed Britain who delayed their departure from the EU marched through central London on Friday, when legislators in parliament strongly rejected Prime Minister Theresa Mays Brexit's agreement for the third time.

On the day when Britain was originally supposed to leave the EU, large groups of bright sunshine gathered outside the parliament waving the Union Jack flags and chanting, "Out means out" – as the queen song Bohemian Rhapsody was played on. speaker with its famous text "Mamma Mia, let me go". Friday's protest, a week after hundreds of thousands marched through the call for a new referendum, shows how split Britain is over Europe three years after voting to leave the EU.

When the result of the vote in parliament was filtered through to the crowds at the Square, the bowl spread, as some protesters considered it to increase the chance of a quick departure from the block.

The protests' mood varied from contentment to despair.

"Excellent. We are now on our way to a "no agreement", says saleswoman Louise Hemple, 52, who is shadowed by Winston Churchill's statue outside Parliament. "And that will mean we get complete control, which is what we Brexiteers voted for."

Hemple said she would continue to protest until Britain had left the EU because she did not trust lawmakers to do so.

"They're in their bubble in there. It's about their voice, not our voice," she said, referring to the 1

Nigel Farage – the politician believed to have done most to joke Britain's government to accept holding the referendum – turned to the crowd at the end of a 270-mile (435 km), two-week march from Sunderland, northeast England, to London.

"What should have been a party is actually a day of fraud," Farage told Reuters. "There will be a lot of anger. I have never known anything in my life when people have said such rude things about the political class, the government."

A pro-Brexit protest has a sign in March to leave demonstration in London, UK March 29, 2019. REUTERS / Toby Melville

Earlier, about 1,000 Abandoned followers had gathered at Bishop's Park on the banks of the Thames to march the four miles to Parliament.

Among them was David Malindine, 63, a retired teacher.

"We have to remind the country that the majority of people voted" Leave, "Malindine said." It was the day we were to leave and Brexit was betrayed. "

Many people said that their Central complaint was a political elite who did not represent them.

A poster said: "Politicians worth their weight in quiz." Another said: "Parliament? A pile of foam and villain. "

Labor Party politician Lisa Nandy – who opposed May's deal – said she and her staff were called traitors by protesters when she tried to enter parliament to vote.

Father-Right Leave activists including Tommy Robinson spoke at a separate meeting nearby.

Robinson led the audience in song Regel Britannia The armed on stage beside him was a coffin with corn face on it and the word "democracy."

Some protesters dragged dummies wearing masks from May and the working group Jeremy Corbyn through the streets and left them outside the gates of May's Downing Street residence.

Later in the evening, there was a slight shift between Robinson supporters and the police when about 100 supporters protested outside the maize office and shouted : "We want Brexit! We want Brexit! London police said it had arrested five protesters from 2100 GMT.

Andy Allan, 58, who wore a red and white St George's flag, predicted that there might be turmoil modeled on the "yellow west" protests that rocked Paris in The last few months, if Britain fails to leave the EU. "" It is absolutely disgusting what is happening, "he said." Be warned – this is just the start of a mass rebellion if we are betrayed by the politicians. 19659029] Editing Stephen Addison / Guy Faulconbridge and Marguerita Choy