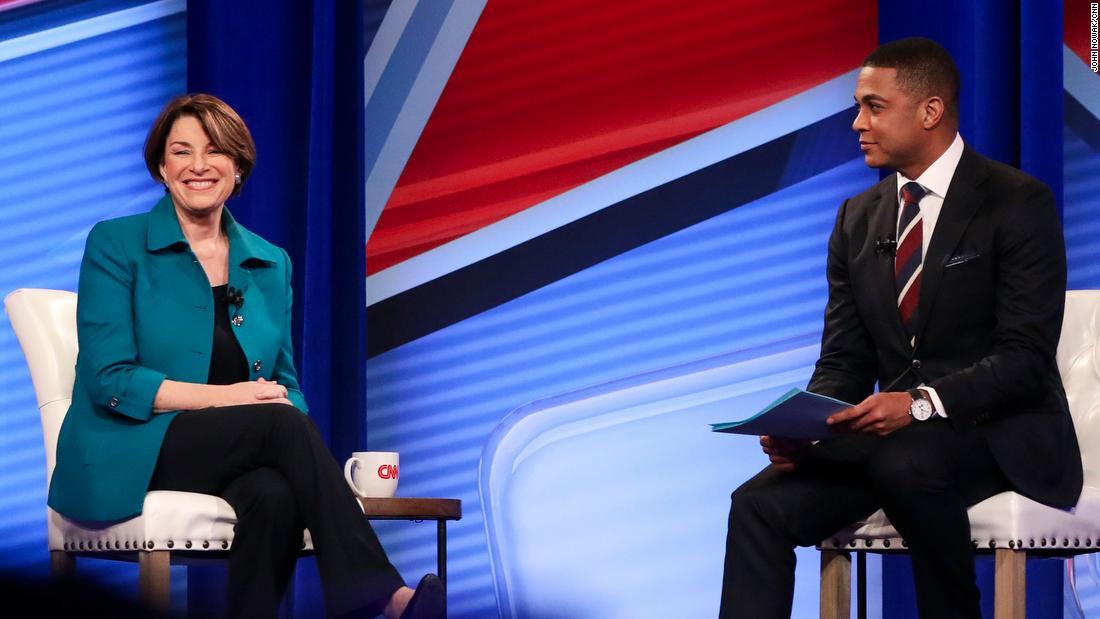 At a CNN town hall with voters here on Monday night, the Minnesota Democrat offered few sugar-coated promises on causes that have become popular among the party's progressive base. Instead, she gave retail details about why there are no easy fixes to these challenges, despite what they might hear from other Democrats.

while resisting the urge to pander to the party's progressive wing.

Her approach on stage at st. Anselm College, which echoes early conversations she has with voters in New Hampshire and Iowa, offers a glimpse into how she hopes to differentiate herself from a large and still-growing field of 2020 Democratic hopefuls. Even as she touts her progressive record, she is seeking to carve out a more moderate lane, while emphasizing her ability to accomplish the goals she lays out.

The wind of the democratic presidential primary is fiercely left from the left, but on Monday night she showed few signs of bending.

possibility in the future. I'm just looking for something that will work now. " She said her focus would be on improving the Affordable Care Act, expanding both Medicare and Medicaid and creating a public option.

0 years. "I think they are aspirations," she said.

"The actual legislation you do," she added, "we know there's going to be compromises."

She pledged on day one of her presidency to re-enter the US into the Paris climate agreement and move to the clean power rules that the Obama administration had supported.

And when asked if she supported free college, she replied: "No. I am not for free four-year college for all."

As the crowd including many students listened intently, she said: "If I was a magic genius and could afford to give that to everyone I would . "

She said her plan was to make it easier for students to refinance their loans, make community colleges free and extend Pell grants.

Finally, she added: "I have to tell the truth. We have this debt that the Trump administration keeps getting worse and worse. I don't want to leave that on the shoulders of all these we've got to do a balance. "

It's an open question, of course, whether the path to winning the Democratic presidential nomination remains in the middle. The energy in the party comes from its left wing, where several of its rivals are positioning themselves.

While Democrats have unified around their opposition to President Donald Trump, the field is starting to take new shape.

Sen. Kamala Harris stands behind her support for Medicare-for-all – at least as one option to addressing the health care crisis. Late. Kirsten Gillibrand touts here belief in the Green New Deal. And Sen. Elizabeth Warren is pushing a new wealth tax

A year before the voting starts, the series of liberal ideas are creating early litmus tests and potentially setting up long-term political landmines. What sounds good in a primary campaign, often spell trouble in a general election.

The divisions are also out on the Senate floor, including on last week's vote to avoid a government shutdown. Klobuchar joined Sens. Sherrod Brown and Bernie Sanders in supporting the spending bill, while Sen. Cory Booker, Harris, Gillibrand and Warren opposed it.

There are, surely, many more dividing lines to come. And at this early juncture, most Democrats are only beginning to study the candidates. But judging by the standing ovation she received from the crowd on Monday night, Klobuchar showed that she is well on her way to carving out her lane in the crowded field.

She was armed with a sense of humor and a willingness to say no. The question, of course, is how big an appetite exists for that in a party steadily shifting to the left.