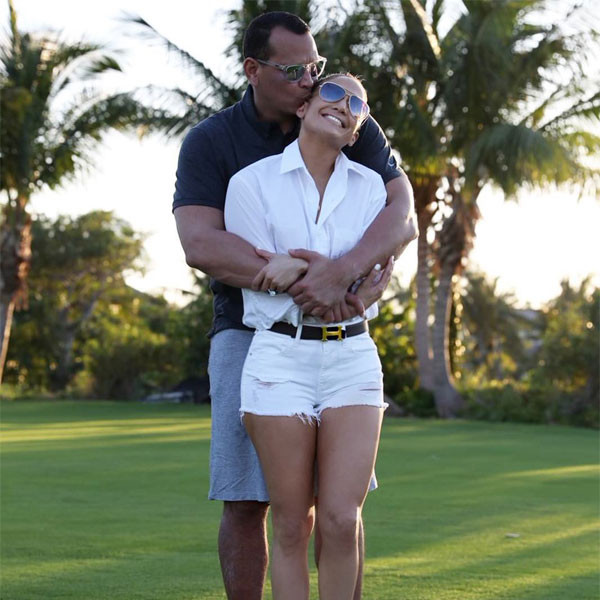 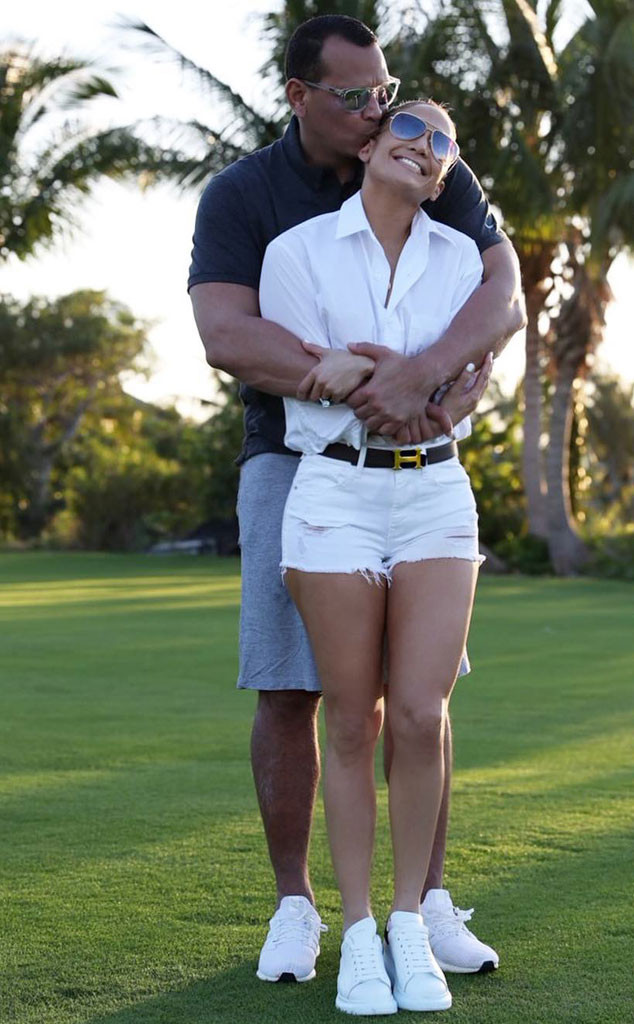 Alex Rodriguez has hit another home run when it comes to heartwarming posts about his fiancée Jennifer Lopez .

On Sunday, the forms New York Yankees star shared a photo of them in the middle of a sweet embrace. J.Lo is about to start work on her upcoming movie called Hustlers which also stars Cardi B (a film her debut!), Lili Reinhart Constance Wu Keke Palmer Julia Stiles and Mercedes Ruehl. A-Rod took a moment on social media to praise J.Lo and her incredible work ethic and drive.

"This beautiful woman starts shooting her movie tomorrow," Hustlers, "he began. "I don't play spoiler, but I can't wait until you see how she transforms herself into a completely different character !!"

A-Rod added, "She's been working so hard lately. I'm happy we were able to enjoy a quick little break before she dives into this new project. Love you baby and continue to shine, fly high and inspire all of us. "

Does it get much better than that?

J. Lo and A-got engaged on March 9 after two years together. He popped the question while they were vacationing together in Baker's Bay and he slipped into a massive emerald cut ring on her finger that's reportedly worth at least $ 1

According to a source, Rodriguez's proposal totally caught J.Lo by surprise. "Even though this trip to the Bahamas has been planned for a few weeks friends had no idea that Alex would be popping the question this weekend," a source said at the time. "Alex kept all of the details surrounding his ring shopping and his proposal very private — almost everyone in their inner circle was caught by surprise when Jennifer posted the photo of the ring."

A second source added , "Jennifer had no idea he was planning on doing it. Alex was very happy he was able to pull it off without her knowing."

The couple received an outpouring of support after they went public with the news. Khloe Kardashian Ashley Graham Ellen DeGeneres Kris Jenner DJ Khaled and so many more celebrities offered their congratulations that day and the days following. It wasn't just Hollywood A-listers, either. Barack Obama and Michelle Obama just send them a handwritten note wishing them the best.

"Jennifer & Alex, Michelle and I just wanted to congratulate you on your engagement," the 44th President penned . "After 26 years together, we can say that whatever challenges life can bring, sharing them with someone you love makes it all better. All the best." Check out some of the photos below to see J.Lo and A- Rod's road to engagement

J.Lo and her then-husband meet A-Rod for the first time on the field at Shea Stadium in New York City, where his team the New York Yankees faced off against the home team the New York Mets. Lopez wears a Yankees cap. Anthony wears a Mets cap. The three all posed for photos …

In March, E! News confirms the pop star is dating the form New York Yankees baseball player. A source says, "This is very, very new. It's not serious at all. J. Lo is just dating. Jennifer and Alex are not just looking for a relationship, just a good light-hearted time. They are on the exact same Page. " In February 2018, J.Lo tells E! News that February 3 was a one-year anniversary, saying, "That's our day. Oh, my God! It's been a year."

In a 2019 interview on Jimmy Kimmel Live! J.Lo reveals that on their first Valentine's Day together, A-Rod surprised her with chocolates, flowers and a cake at her hotel room in Las Vegas , where she performs a residency show.

J.Lo and A-vacation together in the Bahamas

J.Loops on her Instagram, A Deliciously Delighted and A-Rod

J.Lo and Alex are spotted at a gym in Miami

The new couple is spotted leaving a romantic dinner at Casa Tua in Miami, where both homes and where grew up.

"Any given Friday! # Miscñis! #Jlo," she writes, using the Spanish slang term for "sisters-in-law."

J.Lo supports A-Rod at a New York Yankees spring training baseball game. The retired MLB serves as a special advisor to his past team

An insider tells E! News that J.Lo and A-Rod may be getting more serious, saying, "All his friends can tell he really likes J.Lo [but] at the beginning they thought this might just be a fling. He calls J.Lo. his lady. He would wife her up in a heartbeat … She is different than other people he's dated. "

The two take their romance coast-to-coast: J.Lo and A-spotted in the Los Angeles area, driving to her house in Bel-Air after working out together at the Beverly Hills gym or J.Lo's trainer Gunnar Peterson

A-Rod breaks his silence about his relationship with J.Lo on The View . He says, "It's obvious … We're having a great time. She's an amazing, amazing girl. One of the smartest human beings I've ever with and also an incredible mother."

A month after going public with her relationship with A-Rod, J.Lo and her mom, Guadalupe Rodríguez are photographed with him in the couple's native New York City.

"Boyfriend and girlfriend titles have been vocalized with each other," a source tells E! News. Jennifer Lopez, Alex Rodriguez, Casa De Campo “/>

The New York-born athlete lived for years as a child

Late April 2017: Details on the Encounter That Changed It All

J.Lo opens up about her relationship with A-Rod, in an interview on The Ellen DeGeneres Show . She says she approached him while he was on his way out of a Los Angeles restaurant and the two soon went out to dinner.

In April 2018, A-Rod tells Ellen DeGeneres that he was leaving a work lunch when he realized that he forgot where he parked his car. While getting upset about it, J.Lo tapped him on the shoulder. He says, "I do not recognize this person and its Jennifer, but she's dressed up as Harlee from Shades of Blue. nd she's in her jeans and her big boots and it took me about four, five Alex Rodriguez, Jennifer Lopez, 2017 With Gala, Couples “/>

The two make their first joint carpet appearance at the 2017 Met Gala. J.Lo later says on the Today show, "We had a great time. We went in. We danced. It was awesome." She adds, "He's a good dancer. He has a great time. Again, one of the things I love is that he loves to dance, and I love to dance … he dances merengue. He dances all the important stuff for me

"J.Lo and A-Rod are getting very serious and talking marriage," a source tells E! News. "J.Lo wants a future with A-Rod. J.Lo would mar A-Rod if he asked. She is head over heals for him. They get each other in so many ways."

A-Rod brings his then-12-year-old daughter Natasha to J.Lo's concert residency show All I Have in Las Vegas. He was merely returning the favor; The little girl had performed for the singer a week prior. J.Lo later tells E! News, "It's so great. Everybody gets along so well. We're so blessed. We have beautiful children; we love our life and we're just great."

J.Lo and A-Rod are photographed on a luxury yacht near Antebes. The cost of their trip to France? An estimated $ 350,000. Jennifer Lopez, Alex Rodriguez, Birthday, Party “/>

The two celebrate their birthdays together at a surprise party that A-Rod throws in Miami. She turns 48 two days later and he turns 42 five days later

A-Rod tells HOLA! USA "I'm in a good relationship. I feel like I can say that for the first time — I don't know — maybe ever. And not that I didn't have great relationships, full of love and

Late September 2017: A- Rod Is Asked About Engagement

When asked about a possible engagement happening for the couple in the near future, A-Rod playfully dodges the question, count E! News, "About the question, I need to find out which episode is in first." He is also asked about rumors they are moving in together. He pauses for a few moments before saying, "I don't know." One Voice: Somos Live !, Jennifer Lopez, Alex Rodriguez “/>

The two appear together on the benefit concert telecast One Voice: Somos Live! A Concert for Disaster Relief and before the show, raise $ 26 million through corporate donations from the business, sports and entertainment world.

J.Lo and A-Rod pose for an adorable selfie with her 9-year-old twins Max and Emme and his daughters Natasha 13 , and Ella 9, while sitting courtside at a Los Angeles Lakers game at Staples Center. Alex Rodriguez, Jennifer Lopez “/>

J.Lo is asked about an engagement again. She tells E! News, "No, I don't like any pressure for anything," then laughs and looks at A-Rod, who smiles.

"I do believe in marriage, and I would love to grow old with somebody in a committed relationship," she tells Harper's Bazaar . "But I'm not forcing anything right now. It's good, it's healthy, we communicate well. We understand each other's lives in the way that most other people couldn't. We both entered the public eye in our early 20s and overachieved right From the start And that affects every dynamic in your life, from your family to your relationships. We have a similar makeup. "

Late March 2018: Moving in Together

E! News confirms the couple has purchased a three bedroom, 4.5 bathroom unit in Manhattan's 432 Park Avenue. The space, located in the largest residential building in the Western Hemisphere, costs about $ 15.3 million

Singer's releases new single "El Anillo," which translates to "The Ring," and it is indeed about her relationship with A-Rod.

"We're good right now," J.Lo says about A -Rod, when asked about engagement rumors again. "I'm not trying to rush into anything, I've done that before, to no avail. I'm a little bit more grown up now and I like to let things take their natural course." Meanwhile, A-Rod tells Jimmy Fallon a month later, when asked if he was thinking of proposing, "I will say this: When it happens, Jimmy, you'll be the first to know." 19659163] Jennifer Lopez, Alex Rodriguez With Gala 2018, Couples “/>

The two shine in Balmain at their second Met gala date, a year after they made their red carpet debut at the annual avent.

The blended families prepare for another joint holiday celebration.

December 2018: Endorsement from Leah Remini
Remini and J.Lo are BFFs. Remini tells E! News, when asked about her friend's relationship with A-Rod, "I think it's about seeing your friend and that's when you know."

During a vacation with J.Lo, A-Rod shares on his Instagram Story and excerpt of a poem called "Soulmate" which was written by Bianca Sparacino .

The two confirm their engagement on Instagram. A-Rod proposed to J.Lo that day with a massive diamond engagement ring estimated to be worth at least $ 1 million during vacation in the Bahamas.


After the engagement comes … A-Rod posted this right after announcing the news, which leaves little to the imagination.

Congratulations again on the engagement and upcoming movie!