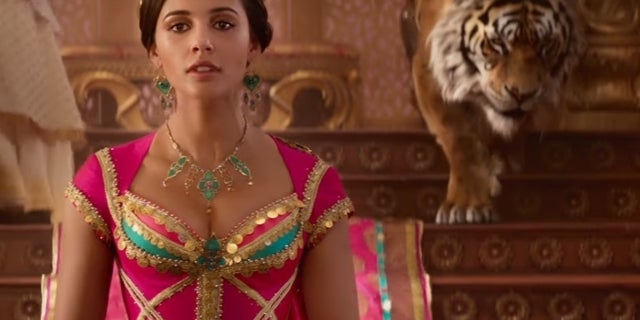 Disney dropped an extended sneak peek of Aladdin earlier this evening giving fans their first solid look at the live-action remake of the animated classic. Along with the first official look of Will Smith's blue-skinned genie, the sneak peek also happened to feature the first look at Princess Jasmine's (Naomi Scott) pet tiger Rajah.

Serving as Jasmine's primary friend and protector around the palace, initial reports that the likes of Rajah, Abu, and Iyago wouldn't appear. Thankfully, this sneak peek certainly confirms their involvement.

Initially, Rajah was reportedly replaced by Dalia, a handy character played by Nasim Pedrad. Jasmine was the most prominent feature of the movie, featuring Jasmine the lone female character in a major role.

t that crazy? ”Scott said. “The Dalia character is so important to this movie because she's the only other female character. She may be the best friends but they are the best friends; They're so close because they're grown up together. So we wanted people to watch the movie and see Jasmine's relationship with another woman, and be like, 'Ah, that's what I'm like with my girlfriend,' or 'We would do that if I was in that position.' something that's missing from the animation. ”

The Power Rangers have been released in a different interview how they've changed Jasmine to make the character mesh with modern times.

1; I could literally go on for an hour! Everyone involved in this project afraid to really just rip things down and start again, especially the Princess Jasmine character, because it's so important to get that right, "Scott customs THR .

"[She] can be strong and have fun, but also get it wrong and be emotional. She's a multidimensional woman, and she doesn't have just one thing, ”she continued. "So in this movie, here you go on such a roller coaster, as opposed to her one goal being to fall in love or get married."

Aladdin hits theaters on May 24th.

Aladdin sneak peek? Let us know your thoughts in the comments below!