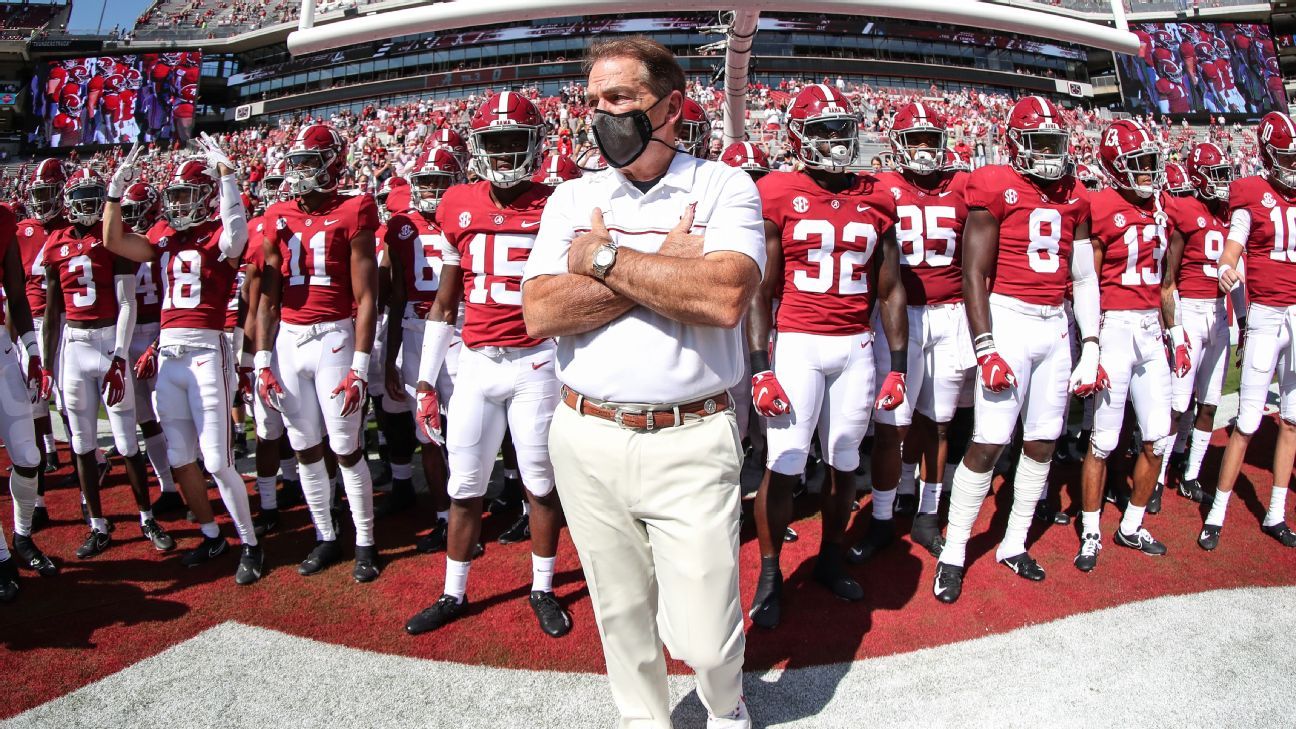 Alabama football coach Nick Saban, pr. SEC protocol, has been cleared to return to the sidelines for Saturday night’s clash against No. 3 Georgia after his third negative test in a row for COVID-19, the school announced.

Sources told ESPN that Saban was informed that he had been approved to return shortly before noon. 12.30 ET, and he immediately left his home with a state trooper to go directly to the team hotel and was able to attend meetings before kl. 13 ET.

Alabama team doctor Dr. Jimmy Robinson said in a statement that Saban had negative polymerase chain reaction (PCR) testing at. 7 Thursday, Friday and Saturday after an initial positive test on Wednesday. The school added two more PCR tests, from Thursday and Friday, were taken “by abundance of caution”

; and were also found to be negative in a separate laboratory.

“Due to the fact that Coach Saban has been completely asymptomatic and had five negative PCR tests spread across two separate laboratories, the initial test from Wednesday is considered a false positive under the SEC protocols,” Robinson said. “… In accordance with the SEC Return to Activity and Medical Guidance Task Force Protocol and with the approval of the University of Alabama System Health and Safety Task Force, Coach Saban is medically approved to safely return to activity immediately.”

Saturday morning’s test was flown to an SEC-approved lab in Mobile, Alabama, for a quick turnaround.

Robinson said in his statement that university officials had been in constant communication with the conference office throughout the process to ensure compliance with all applicable protocols.

Alabama announced Wednesday that Saban, who turns 69 later this month, tested positive for COVID-19. He immediately left the Mal M. Moore Athletic Facility and began isolating himself at home.

However, SEC guidelines state that if a person has three consecutive negative PCR tests through an SEC-designated laboratory every 24 hours and remains asymptomatic, the initial test will be considered a false positive and the person may be released from isolation and medically cleared to return to athletic activities.

On Friday, Alabama said Saban’s first positive test result came from an external lab that the university has used to supplement the SEC-mandated test.

A source close to Saban told ESPN that from the start, he felt the initial test was false positive because he never had any symptoms or experienced fever.

“He did not even have a sniffle,” the source said.

Saban was not at the football complex in the second half of the week, but he chaired team and staff meetings via Zoom and watched the exercises on a live feed from home – with an angled camera view – and communicated with coaches. via cell phone if he would have done part of the exercise about.

An employee told ESPN that Saban might not have been there physically, but that he was certainly there in the spirit and did not miss anything from home.

“You did not see him out there, but it’s almost like he never went,” the employee said.

Saban showed up at ESPN’s College GameDay Saturday morning from his home and admitted that he felt “a little detached” this week, but that he remained involved with almost the team and staff in everything they have done in both practice and meetings. .

“Even though I’m not there, the presence has been the same,” Saban said.

Sources told ESPN that Alabama has not had any positive tests among its players in this recent test round and expects to be full force for the Bulldogs’ visit to Bryant-Denny Stadium.

Saban told GameDay that Alabama conducted 240 tests in the last two days and that all were negative. Saban said he tested negative Sunday, Monday and Tuesday before the positive test on Wednesday.

“I have to trust the doctors and the medical people who make these protocols safe for all of us,” Saban said. “Our players have done a good job of practicing social distancing, and this experience has made me have a lot of respect for what we have to do … And we will continue to do that in the future.”

Football in Georgia instant observations after 14-3 victory over Kentucky