Aid is piling up on Venezuela's border. Here's why it's not getting in 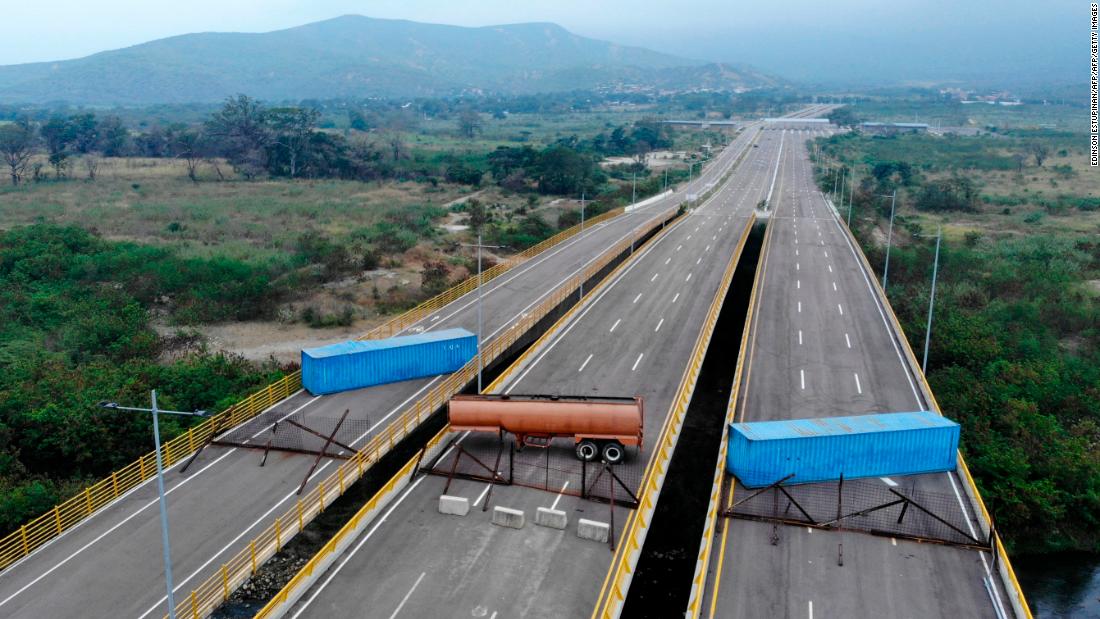 The slow advance of aid toward impoverished Venezuela has become a proxy measure of the power struggle between its two rival presidents. At the same time, there is little doubt that the Venezuelan people are in need or help. So why is it so hard to agree on aid?

Guaido has thrown all his weight behind a "humanitarian channel" that would bring tons of much-needed aid from foreign countries into Venezuela. But the plan isn't just benevolent – it's also a direct jab at Maduro, who for years has denied that a humanitarian crisis was happening in Venezuela.

"The impact of the humanitarian aid is highly political," admits Juan Miguel Matheus, an MP for the opposition. "Our first and primary goal is to provide relief for the Venezuelan population, but after that, with this move we want to checkmate Maduro.

" If the aid gets in, Maduro is shown to have lost control of the situation; if it doesn't get in, we show that Maduro doesn't care for the suffering of the people, "he says.

Many reputable international organizations, including both the Red Cross and Caritas, the humanitarian arm of the Catholic Church, have participated in Guaido's aid campaign. The Red Cross tells CNN that the initiative organized by the Venezuelan opposition is too political.

"The action of the Red Cross is based on two principles: humanity and neutrality. Neutrality is the most important one in situations like this, "says Francesco Rocca, president of the International Federation of Red Cross and Red Crescent Societies. He is adamant that Venezuela should receive humanitarian aid, but that the operation should be a concerted effort. 1

9659002] Only through an agreement between the two sides could be really effective, he says.

The United Nations has also chosen not to take sides, calling instead on both parties to de-escalate tensions.

The United States has pledged 20 million dollars to help Venezuela, which has so far gone into three deliveries of air cargo to a border town in Colombia, Where it is posted to the country

Canada, Germany and the United Kingdom have also chipped in, among others.

Colombia has provided the logistical facilities for transporting the aid. been announced in Brazil and Curaçao, both also near the Venezuelan border

Venezuela's closest neighbors, like Colombia, are most interested in seeing aid, as they hope this measure could help reduce the wave of Venezuelan refugees pouring across their borders.

What is Maduro doing?

Maduro sees the opposition-led plan as a trap, and has rejected the humanitarian aid it would bring. Accepting foreign supplies during the current political crisis would be tantamount to accepting foreign political intervention, from Maduro's point of view.

When the US sent a shipment of medical and food supplies to the Venezuelan border last week, Maduro's regime installed a blockade on One of the bridges that connects Venezuela and Colombia.
Just a week ago on state television, Maduro dismissed Guaido's initiative, saying "Venezuelans are not beggars." But patriotism did not prevent Maduro from accepting $ 9 million from the UN in November 2018. Related: Venezuela closes key maritime, air borders

opposition, which controls little real power on the ground in Venezuela, can guarantee that will enter the country by Sunday.

While Guaido has described "human wave" of volunteers heading to the border to carry supplies, very few aid professionals have lifted their hands to join in the effort.