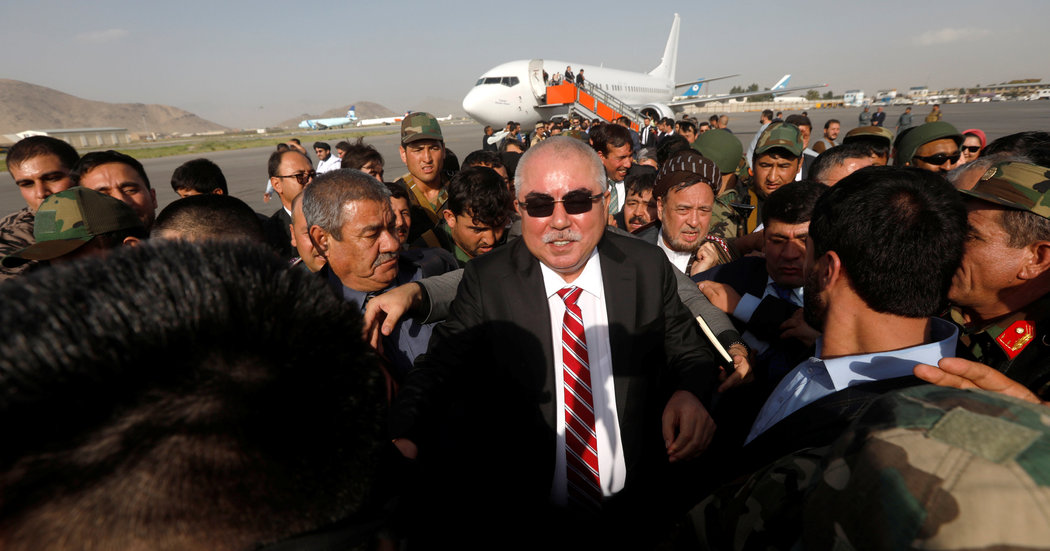 Two years later, General Dostum was accused, along with nine of his top security officials and bodyguards, of kidnapping, torturing and raping a political rival, Ahmad Ishchi, who was then in his early 60s. General Dostum left for exile in Turkey, claiming medical issues, but still vice president when he returned last year.

Despite the criminal charges against them, General Dostum and his more senior security aides have yet to be prosecuted on the rape charges. Seven of his low-level bodyguards were convicted and sent to five years in prison in the same case, although they were never arrested or imprisoned, and were even seen on television in the general's heavily armed entourage.

General Dostum has been accused of numerous crimes including rape, kidnapping and the murder of his first wife.

While apparently immune from prosecution, General Dostum was sidelined from his vice-presidential duties, and has announced that he will be supporting Mr. Ghani's rival, Abdullah Abdullah, in this year's presidential race, if it takes place.

When he arrived on Saturday in Mazar-i-Sharif, where there is a large Uzbek minority, General Dostum is addressed to a crowd of his supporters. He predicted that he would be ambushed by the Taliban when he returned that night to Jowzan, which is exactly what happened

"I have been informed that we face an ambush," he said. “Listen to me: It is not good to stone a nest.”

General Dostum also criticized the peace process and boasted that he could quickly defeat the Taliban in the north with the help of his own armed followers if the government would watch him. He recalled how in 2001 he and his men went into battle against the Taliban on horseback, supported by the C.I.A. More recent attempts to battle the Taliban using private militias have had little success.