A Trade War Morphs Into An Economic War 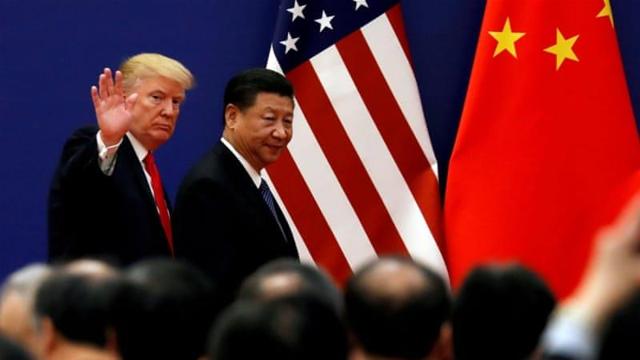 Something just happened which, in my view, transformed the current trade was with China into an economic war. And the U.S. took the first shot here. Let me explain.

Already, the U.S. was trying to punish Huawei for its supposed breach of Iran sanctions. Also, the U.S. Pat. had decided to ban the sale of Huawei telecom equipment domestically, for supposed national security reasons.

Given the underlying sentiment caused by those two issues, Huawei, the largest telecom equipment maker in the world and the second-largest smartphone maker, had decided to quit on the US consumer market. That is, while Huawei is one of the most competitive providers of Android smartphones the world over, you can buy those same Huawei smartphones in the U.S. All fine and dandy. A market can always be closed to someone's wares. For sure, China has been closed to many U.S. web giants as well. This includes Google (GOOG) (NASDAQ: GOOGL), Facebook (FB), etc.

But this weekend, something else took place. This was the blacklist of Huawei as a supplier of telecom equipment market in the U.S. Instead, it was the addition of Huawei to the Department of Commerce's Entity List. What this addition means is that U.S. suppliers are, for a large range of products and situations, forbidden to do business with Huawei unless they have a specific license to do so

This is an extreme and disproportionate response. In practice, it means that the U.S. Huawei is not just trying to sell its wares in the United States, but also everywhere else. It is an act of economic war that severely damages Huawei

As we saw, Huawei is selling its excellent Android smartphones in the U.S. However, elsewhere Huawei sells extremely well, to the point where it became the second-largest smartphone supplier in the world (according to IDC) even with no US sales. Only Samsung (OTC: SSNLF) is larger. 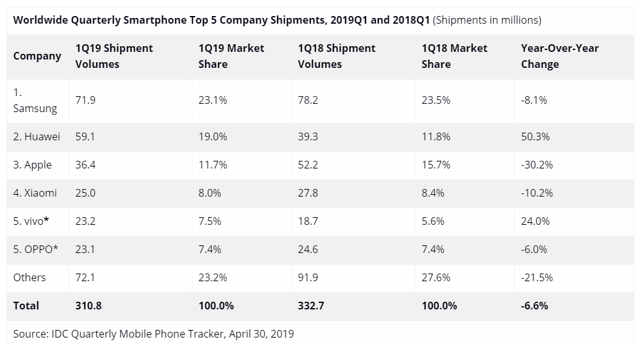 Now, right after the U.S. decided adding Huawei to the Entity list, announcements have started from U.S. suppliers regarding their Huawei business. Google pulled Huawei's Android license, which means Google will now not allow Google Play or Google Play Services in its smartphones (as well as other Google apps). Although this is only applicable to new phone models or OS upgrades, this applies to the entire world .

For Huawei, if the situation is not solved quickly, this will mean that its smartphone sales outside of China will quickly collapse. After all, the lack of Google Play and Google Play services is an extreme feature loss, rendering many Android apps unavailable or incompatible.

It's in this context that this is an act of economic war. Not only was Huawei implied from selling in the US, but this measure is an attack on Huawei anywhere in the world. This can lead to extreme downsizing or Huawei, if this is not very good, very quickly.

Moreover, the Google news was then followed by news of other suppliers doing the same. These chip suppliers will reinforce the attack on Huawei's multiple businesses, both in and outside of China (as well as the rest of the world).

One needs to take a step back here. This extreme blow on Huawei happened because of rather irrelevant actions regarding Iran and rather evidence of Huawei telecom equipment having (intentional) backdoors (there are unintentional ones as a result of poor code, which are probably present in many different suppliers' equipment ). The punishment is way out of proportion and seeks to destroy the company, if left unresolved.

China will thus see this as not another development in the trade war, but as an act of economic war against one of its largest and most representative tech companies. The range of consequences is rather unpredictable. But we can try to do what China might do to retaliate.

The Most Obvious Retaliation – Banning Apple

This is an obvious retaliation, if China wouldn't really suffer from it. Apple would be substituted for local brands, so economic activity would not – and indeed, the net impact could be positive.

elsewhere, unlike the US is doing. Also, the exact same grounds used on Huawei (national security considerations) could be applied in banning Apple sales.

Moreover, iPhone sales in China would greatly compensate Huawei for the international ban. After all, Huawei would be the brand, in China, which would take most of the share lost by Apple if the iPhone is banned.

The materialization of the risk of the U.S. doing what it's doing to Huawei is sure to open eyes across the Pacific. In China, for sure, but possibly also elsewhere. It's one thing to close a market to someone else's wares. It's quite another to try and destroy someone else's company by limiting their ability to sell anywhere in the world.

This is to lead both to the drawing of contingency plans, and to an extreme effort to rely on single-point- of-failure US leverandører. Be them for software, hardware or materials.

There's a place where the reaction can be obvious, even though the U.S. might also try to affect that route. I'm talking about Intel (INTC) / AMD (AMD) reliance. Both are U.S. Pat. suppliers, whereas ARM Technologies is not. ARM is a British CPU technology supplier now owned by the Japanese. Hence, the current event creates a lot more pressure to rely on ARM for servers and PCs over the x86 architecture. ARM already dominates the smartphone market and is used on a license by all players including Huawei.

Typically, one would think that China has much more to trade with than the US does. The reason for this is that Chinese exports into the U.S. (~ $ 540 billion) are much larger than U.S. exports to China (~ $ 120 trillion).

But this thinking can be extremely flawed. Exports only account for what’s produced in the U.S. and sold to China. Yet, most of what U.S. companies sell in China they also produce in China, or at sausage, somewhere else ex-US. These sales will not show up as U.S. exports into China

As a result, the exposure of U.S. Companies to China are much larger than the export statistics show. Also as a result, brands ’sales in China can have large consequences. For instance, in the case of Apple, China represented 19.6% of its entire revenue base during FY2018. The same tends to happen over and over to other brands.

As I said regarding retaliation vs. Apple, typically China has local suppliers for nearly any consumer item. This means that banning any specific foreign brand to favor local brands and local suppliers and results in a not positive for China

China is not going to react militarily to this provocation. It won, mostly because it can (because of the US superior military power). Where the roles reversed and had a similar attack taken on a very large U.S. corporation, though, and there would be a chance would, indeed, react militarily to it (vs. a smaller player, not China).

China rulers will be keenly aware of this. Hence, this event will work like a powerful motivator for China to seek even more military power.

We can say that this development is increasing overall risk across the entire world. This event was extreme and it will create extreme bad will, especially if it's not very fast and thus leads to very profound impacts on Huawei.

The One Possible Saving Grace

There's a possible saving grace in this event. That would be the fact that it might just be a negotiating ploy, seeking for China to work quickly on trade talks, or for the US To immediately soften the impact on Huawei

In my opinion, though, a Pandora's box was opened here. Not everything that came out of it can be put back in. The feeling that there is the ability and will do something as well as trying to destroy someone else's large businesses all over the world has been released. Many of the consequences of this realization will live on even if Huawei's troubles are now walked back.

What we just saw with Huawei was in extreme development. No longer is the U.S. just trying to limit Huawei's access to the U.S. markets. Instead, the U.S. Pat. is taking measures with the objective of punishing and heavily damaging Huawei the world over

The U.S. is doing this to a very large Chinese corporation, one of China's most obvious tech leaders. This is likely to be seen (and is in effect) an act of economic war which seeks to destroy one of China's most important corporations. The biggest seller of telco equipment. The second-largest smartphone maker in the world

It is likely that China will retaliate on this move. The most obvious retaliation would be to sell Apple sales in China. Such a measure would not be an escalation of the economic conflict, but it would fit very well in this war, since it could be taken on the exact same grounds (national security) that Huawei was being attacked on.

The consequences from this move is not going to be exhausted in the tit-for-tat moves resulting from it. They will be more far-reaching. Chinese corporations are sure to have no U.S. supplier as a single-point-of-failure from now on. Alternatives will be sought.

The consequences from this war are also confined to the export balance on each side. China is the largest market in the world for nearly everything. U.S. corporations might see the access to market restricted even if they produce in China (which does not show up on the trade statistics). Apple is an example of what is possible here.

The consequences of this move will also favor Chinese brands and ex-US. brands selling in China. The loss of Chinese market share at U.S. brands will favor alternative suppliers. The consequences will likely lead to U.S. brands are trying to diversify their production bases beyond China. This isn't easy, as China now dominates because it has very good supply chains, and not just because of cost. Moving from China would probably result in higher costs and lower margins for U.S. brands. And even then, it wouldn't favor U.S. production, since the move would be from China to some other developing economy.

Finally, this development is a large negative for world peace. The unbalanced, unproportioned response shows China that needs stronger militarily, so as not to be subjected to abuse outside of U.S. borders. The world will turn out to be a riskier place than a result of this.

Idea Generator is my subscription service. It's based on a unique philosophy (predicting the predictable) and six opportunities wherever it might be, by taking into account both valuation (deeply undervalued situations) and a favorable thesis.

Idea Generator has beaten the S&P 500 by around 49% since inception (in May 2015). There is a risk-free, 14-day trial available for checking out the service.