A our pig painted on a cave wall 45,500 years ago is the world’s oldest depiction of an animal 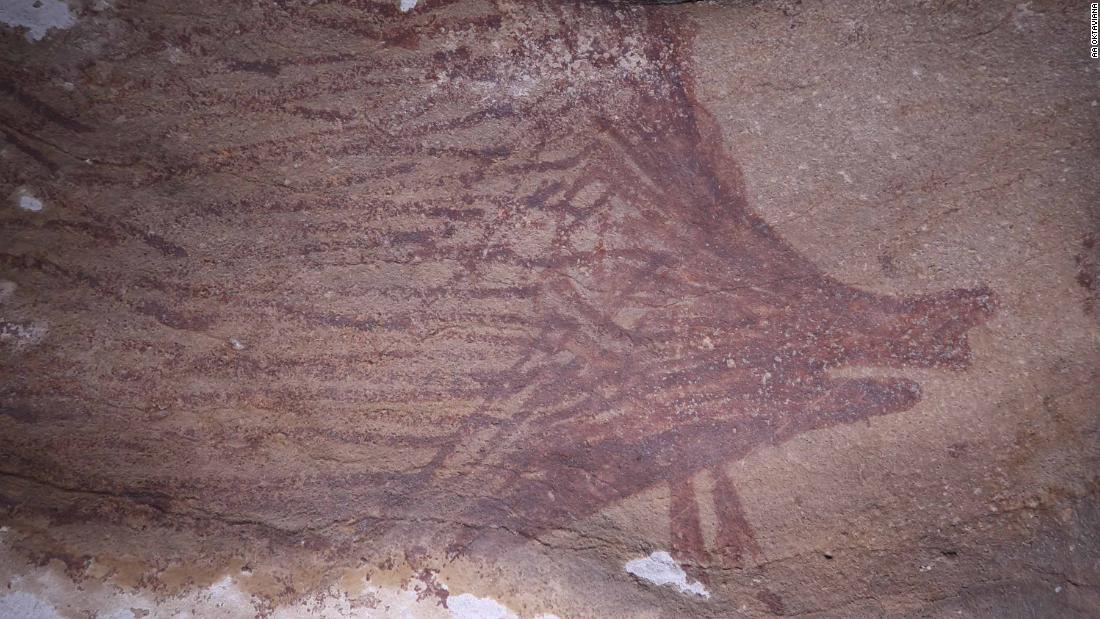 The world’s oldest known figurative art has been discovered in a cave in Indonesia – a loving image of a pig.

Archaeologists working at the site on the island of Sulawesi said the cave art was at least 45,500 years old. It is also believed to be the oldest surviving image of an animal. Painted with red ocher pigment, the animal appears to observe a fight or social interaction between two other wart pigs.

This region is home to many exciting limestone caves where other discoveries have been made. Cave art depicting a hunting scene dating to 43,900 years ago was also found in Sulawesi in late 2019. The same team of archaeologists in 2014 found human hand stencils dating to 40,000 years ago.

Previously, it was believed that the oldest known cave art had first appeared in Europe 40,000 years ago and exhibited abstract symbols. 35,000 years ago, art became more sophisticated, showing horses and other animals.

These recent discoveries in Indonesia have challenged a long-held belief that artistic expression – and the cognitive leap that may have accompanied it – began in Europe. The cave paintings in Indonesia shed new light on the early history of mankind.

Study co-author Maxime Aubert, an archaeologist and associate professor at Griffith University in Australia who specializes in dating rock art, said the view was “Eurocentric.”

It is now believed that the ability to create figurative art – referring to the real world – either arose before Homo sapiens migrated out of Africa and set course for Europe and Asia more than 60,000 years ago, or that it arose more than one while humans spread around the globe.

One reason for this may be because it is particularly difficult to date cave art, Aubert explained. However, rock art made in limestone caves can sometimes be dated by measuring the radioactive decay of elements such as uranium in the calcium carbonate deposits – once called cave popcorn – that form naturally on the cave surface.

This was the case at the place Leang Tedongnge in southern Sulawesi, where a small cave popcorn had formed on the back foot of the pig figure after it had been painted. The date indicates that the stage was painted 45,500 years ago, Aubert said, and the cave art could be much older.

Another Sulawesi warthog image from another cave in the region was dated to at least 32,000 years ago using the same method in the study, published in the journal Science Advances on Wednesday.

Another depiction of our pig in another cave was dated to at least 32,000 years ago. Credit: AA Octavian

The team expects that future research in eastern Indonesia will lead to the discovery of much older rock art and other archaeological evidence dating back at least 65,000 years.

“We have found and documented many rock art images in Sulawesi that are still awaiting scientific dating. We expect the early rock art on this island to provide even more significant discoveries,” said study co-author and Indonesian rock art expert Adhi Agus Oktaviana, a doctoral student at Griffith University.

Steep limestone cliffs enclose the limestone cave where the painting was found. The cave is only accessible by a narrow passage during the dry season. Credit: AA Octavian

The researchers were convinced that the image was of a pig, which is shown in profile and filled with irregular patterns of painted lines and dashes due to the presence of pointed head combs and facial warts – the two conspicuous, horn-like protrusions in the upper snout area .

The pig painted in the ceiling of the cave measures 187 centimeters (6 feet) in length and 110 centimeters (3.6 feet) in height and has a red or mulberry color – the prehistoric artists used iron-rich stones as a pigment and could have used two colors. The researchers said there are three other pigs on the scene.

The researchers were convinced that the image was of a pig of ours because of the two conspicuous, horn-like protrusions in the upper snout area. Credit: AA Octavian

Our pigs are still common in Indonesia and have since been domesticated.

Not much is known about the people who made the art, Aubert said.

Research has shown that Homo sapiens arrived in Southeast Asia between 60,000 and 70,000 years ago. While the researchers said they are not able to definitively conclude that the artwork is the craft of cognitively modern humans, it was the most likely explanation.

“Our species must have crossed the Wallacea with jet skis to reach Australia at least 65,000 years ago,” Aubert said, referring to the region between continental Asia and Australia.

“However, the Wallachian islands are poorly explored, and at present the earliest excavated archaeological evidence from this region is much younger in age.”

Non-figurative artwork has been attributed to other early humans, with rock art found in Spain believed to be the craft of the Neanderthals – which overlapped Homo sapiens for about 30,000 years before disappearing 40,000 years ago. However, this finding is disputed.
The depiction of the wart pig is also older than other types of prehistoric works of art found in Europe, such as the “lion man”, a figure of a lion’s head human and a “Venus figure” carved from mammoth ivory, both found in Germany and thought to be about 40,000 years old.
It is also older than a recent find on another Indonesian island – a picture of cattle found in a cave in Borneo.

“This discovery underscores the remarkable antiquity of Indonesia’s rock art and its great importance for understanding the profound history of art and its role in the early history of mankind,” said co-author Adam Brumm, professor at Griffiths Australian Research Center for Human Evolution.