A century after Great War, Supreme Court ponders whether to tear down memorial to American dead 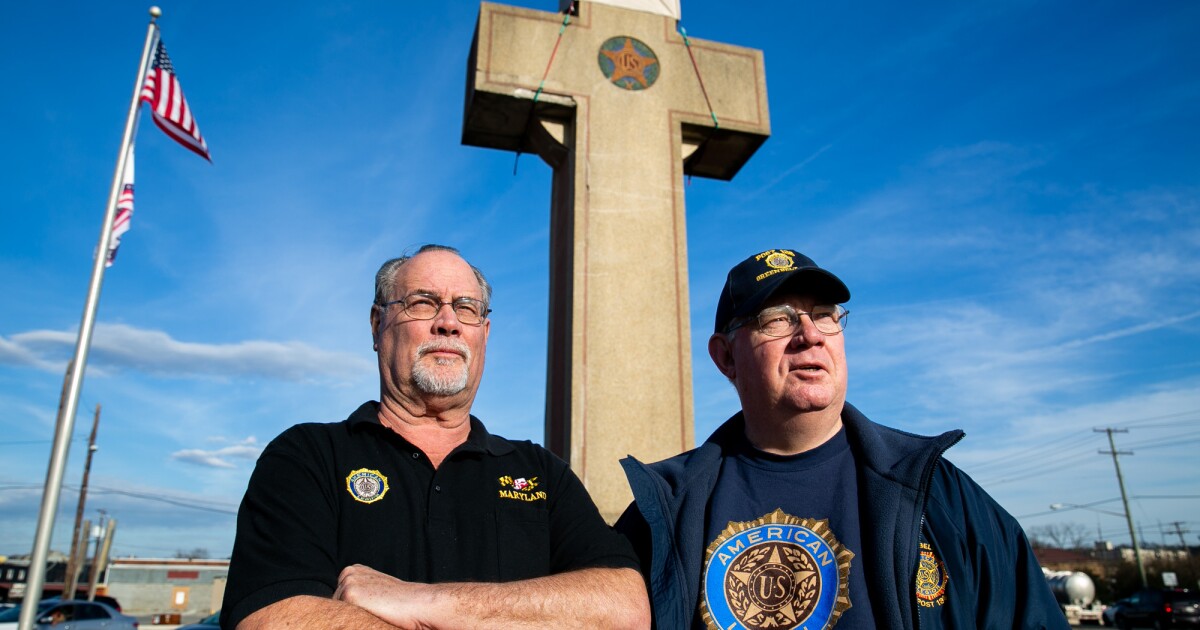 BLADENSBURG, Md. – T hey were farm laborers and firemen, grocery clerks and merchants, sons and brothers who left their families behind to fight the Great War. Forty-nine men from Prince George's County, MD, became sailors, soldiers, and marines and boarded ships bound for France in 1917 and 1918, but did not return home.

Some were killed in action or death of disease while others succumbed to injuries suffered during combat. Arlington National Cemetery or American cemeteries in France. The remains of others were never recovered.

For the people of Prince George's County, a 40-foot Latin cross that sits in the median of a bustling intersection in Bladensburg marks the place where the families of the 49 men who died in World War I could honor their loved ones close to home.

The names of the cases are listed on a plaque in alphabetical order and, despite having been segregated during the war, with no distinction between race.

But a century after they went to war, the future of the Bladensburg World War I Veterans Memorial is now in doubt. Its cross stands at the center of a battle to be waged Wednesday before the nation's highest court, which will decide whether the Peace Cross runs afoul of the Constitution.

The dispute has split the community and supporters of the memorial fear that if deemed unconstitutional, it and similar documents will have to be removed.

"Just giving me cold chills just to think that it might be gone," said Mary Ann LaQuay, whose uncle, Thomas Fenwick, is named on the Peace Cross. "I just imagine that they would take something so precious to me family and to the community."

Posted on public property, the Peace Cross came under scrutiny in 2014 when the American Humanist Association filed a complaint in federal district court arguing the Constitution's Establishment Clause, which is the government from favoring one religion over another. The cross, the group said, "Associates with the Christian religious symbol with the state and given the impression that the state supports and approves of Christianity, as opposed to other religions." Steven Lowe, one of the plaintiffs, argued in court filings have been "personally offended" by the memorial as a non-Christian and "feels excluded by this governmental message."

"Veterans of all stripes are united by their love of country, but they are not united by the cross, "The Jewish War Veterans of the United States of America, which is supporting the American Humanist Association, wrote in a letter to the Supreme Court. "It does a disservice to both Jewish veterans and Christian veterans to suggest otherwise."

The district court in 2014 did not violate the Constitution. But a divided three-judge panel of the 4th U.S. Circuit Court of Appeals found in 2017 that "the purported memorial breaches the wall of separation between Church and State."

The American Legion in June asked the Supreme Court to take up the case and argues that despite its shape, the Peace Cross is solely a memorial. The 4th Circuit's ruling would have "enormous consequences," as it could jeopardize cross-shaped memorials nationwide, including two World War I memorials in Arlington National Cemetery: the Argonne Cross and the Canadian Cross of Sacrifice

In November, the Supreme Court agreed to hear the case. Among those supporting the American Legion are the state of Maryland and 30 others, members of Congress, and the Trump administration, which is urging the justices to adopt a clear

It was Christmas Day in 1918 when Thomas Fenwick's mother, Pearl, learned of her son's burial at an American Cemetery in Mars- sur-Allier, Nievre, France

Well-known pitcher for the baseball team in Hyattsville, MD, Fenwick joined the Maryland National Guard in May 1917. One year later, he boarded the USS Covington and sailed to France, according to historical records. After a gas attack, Fenwick succumbed to pneumonia in October 1918. Fenwick's body was exhumed and eventually laid to rest at Arlington National Cemetery in January 1921. Today, his is among the names inscribed at the base of the Peace Cross. LaQuay, 80, has been hanging in Maryland home, roughly a mile from the monument, but has no photos of her uncle. Instead, it's said Peace Cross that kept him alive in her memory, she said.

"The cross to me has always been referred to as Peace Cross, and what better thing can we promote in our country, in our world, than peace?" she said. "And just to think of that as Peace Cross, it's not meant as anything else. It's not meant anything religious." Pearl Fenwick was among the mothers who helped raise private funds for construction of the cross, LaQuay said. In 1919 and September, Secretary of State Josephus Daniels, planning for a memorial to honor Prince George's County, was honored with the sacrifices of those soldiers during groundbreaking for the Peace Cross and the National Defense Highway, which would run to Annapolis.

The memorial was officially completed in 1925.

'A slap in the face'

The Prince George's County Memorial Committee initially owned the Peace Cross, but in 1922, The American Legion took over the site. The Maryland-National Capital Park and Planning Commission acquired ownership in 1961 and continues to maintain it today. The commission has spent $ 117,000 on repairs and maintenance on the memorial and set aside $ 100,000 for restoration, according to court filings. Today it has broken its tan concrete, and a tarp spread across the top of the cross protects it from water damage.

The American Humanist Association argues that if the Supreme Court were to rule in its favor, it would not portend the cross destruction. Instead, the memorial could be removed from its current location, transferred to a new owner, or modified into an obelisk, the group says.

But for the veterans who have watched the Peace Cross come under siege, it may have been removed is a very real fear.

"These 49 people gave their lives to defend the United States," Phil Holdcraft, fits commander of Colmar Manor American Legion Post 131, said. "And I thought it was just a slap in the face that they wanted to defeat or tear down a veteran's memorial."

Holdcraft has for the last eight years served as the master of ceremonies for Memorial Day and Veterans Day events at the Peace Cross, and recalled how, over the team or The American Legion's five-year court battle, he is often asked by members of the community where their fight stands.

"This is a lot deeper than it appears," Mike Moore, commander of Greenbelt American Legion Post 136, remarks remarked.

Altering the cross, it said, "desecrate a symbol that has stood for 100 years."

"This is a very narrowly focused memorial on 49 people that gave their lives," he said. "It's not about a broader concept of faith or anything like that. It's about those 49 veterans."