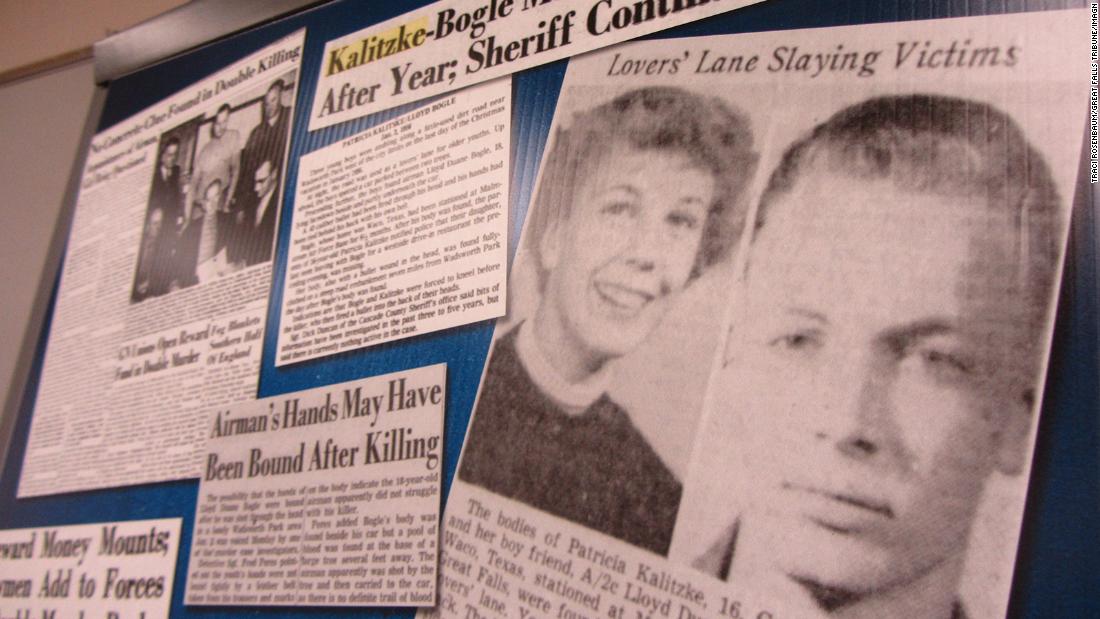 “It was such a big deal,” Cascade County Sheriff’s Office lead investigator Sgt. Jon Kadner told CNN Wednesday night. Investigators have determined the killer was Kenneth Gould, a native of Great Falls who grew up near one of the victims.

Patricia Kalitzke, 16, and her boyfriend Lloyd Duane Bogle, 18, were found fatally shot in the head near Bogle’s car in 1956 in a case that confused investigators for decades.

“Two popular kids who were essentially shot down in a Lovers Lane situation,” Kadner said.

A DNA profile of a suspect in 2001 was developed using forensic evidence preserved from Kalitzke’s 1956 autopsy, Kadner said. The evidence was compared with DNA available in commercial databases.

“They built a family tree backwards and then forwards to develop (the link to) Kenneth Gould,”

Since Gould was determined to be the prime suspect, investigators had no way to confirm it directly with DNA. “He died in 2007 and was cremated,” Sgt. Said Kadner.

Police were able to find two children of Gould who submitted DNA samples that matched the evidence collected in 1956. It was later determined that Gould and Kalitzke were growing up close to each other.

Kadner believes it is the oldest murder case to be solved with this kind of genetic review.

Although he always knew the killer was likely to be dead when he was found, Kadner said he felt driven to solve the case after going through decades of files collected by former detectives.

“They poured their heart and soul into that case, and it made you realize how hard investigators had worked,” he said. “The same thing is essentially happening to you.”

According to the detective, police still do not have a motive in the case, but the families of the victims have expressed gratitude for having at least some answers 65 years later.