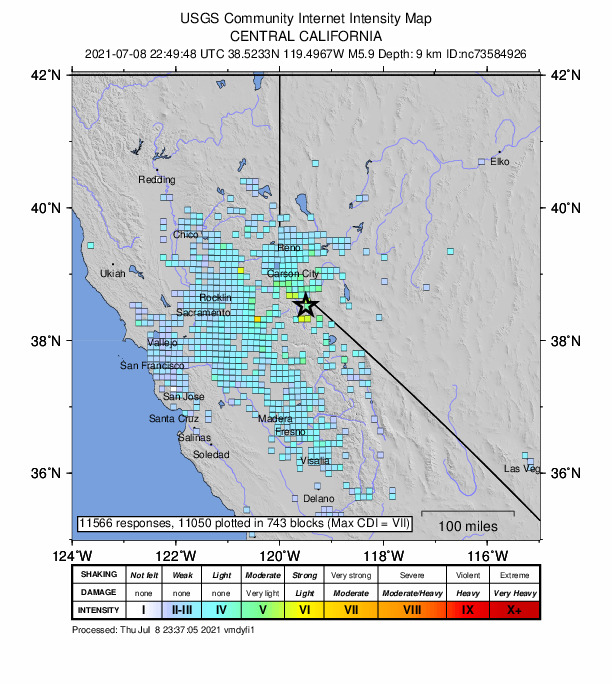 A series of 19 earthquakes struck along the border between California and Nevada starting just before noon. 16 Thursday, most of which hit with a strength of about 3.0. The largest reported earthquake hit a magnitude of 5.9, the US Geological Survey reported.

People reported that they felt the earthquakes as far west as San Francisco and as far south as San Jose.

The USGS had previously reported an earthquake near Stockton, but it appears to be a false reading triggered by an earthquake just south of Lake Tahoe.

Many people took to Twitter Thursday to announce that they felt the earthquakes across California:

Did anyone else have it?

Who else felt that #quake in Sacramento? We definitely did downtown. pic.twitter.com/G4iLXLKbAj

Holy cow that felt like a major earthquake here in South Lake Tahoe, CA. Still feeling rolling. Who else?

Seismologist Lucy Jones explained on Twitter that the 5.9 magnitude earthquake “is a classic normally devastating earthquake for Eastern California.”

“As is common in this region, there are many aftershocks,” she said.

A 5.0 magnitude earthquake could cause significant damage, according to the USGS.

Earlier Thursday, a magnitude 3.6 earthquake shook Napa County, followed by five small earthquakes, all smaller than magnitude 2.0, according to the USGS.

The magnitude 3.6 earthquake struck at 12:36 with a depth of almost 3 feet. The epicenter was near Lake Berryessa, 12 km east of Angwin, 15 km northeast of St. Helena and 36 km northeast of Santa Rosa.

The quake was followed by four aftershocks measuring 1.7, 1.8, 1.9, 1.6 and 1.9. These all hit in the same general area and people did not report that they felt them to the USGS.