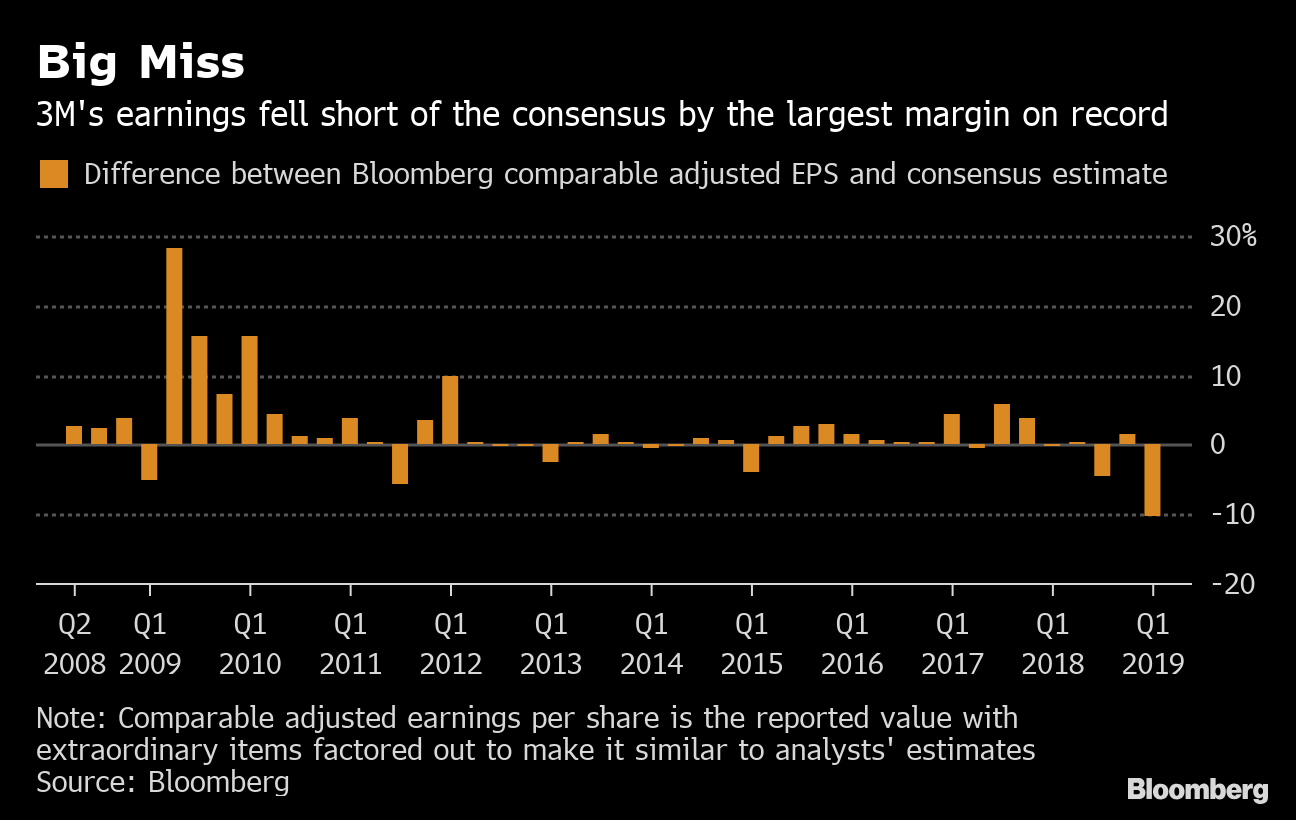 Operating income fell in all five business units in the first quarter, said 3M as it reported earnings that lacked Wall Street's estimates. The manufacturer of Post-it notes and touchscreen shows a particular weakness in the car and electronics markets and warned about headwinds in China.

"We continued to slow down the conditions in the main end markets," said CEO Mike Roman in the company's statement Thursday. "Our operational execution was also short."

The poor performance expands recent pain for 3M, a diversified producer struggling with high raw material prices, healthcare challenges, and unfavorable exchange rates. Roman, who took the helm last year, is seeking to return the company to its stable performance, known for its predecessor, Inge Thulin.

"3M highly disappointed investors with a large operating error and year-round guidance cuts, significantly worse than the cut we had expected," says Deane Dray, an analyst at RBC Capital Markets, in a note. "Four out of the five segments reported operating errors relative to our estimates and underlined the broad weakness."

Without the effect of currency exchange and portfolio changes, sales are at risk of falling as much as 1 percent, 3M says. The St. Paul, Minnesota-based company previously predicted a 1 percent gain to 4 percent gain.

Indicative cuts have become routines for 3M, which reduced the 2019 outlook in January and trimmed the guidance 2018 several times last year. [19659011] Adjusted earnings in the first quarter fell to $ 2.23 per share and demanded $ 2.48 average of analysts estimates prepared by Bloomberg. Sales declined 5 percent to $ 7.86 billion. USD. Analysts had expected $ 8.02 billion.

3M announced a restructuring effort in response to a "slower than expected 2019" that includes 2,000 cuts across all business groups and regions. It represents approx. 2 percent of the company's workforce. The move, which will result in a price cap of 20 cents per share this year, will save 100 million. $ Prize in 2019 and 225 million. USD to 250 million USD a year, says the company.

To contact the reporter about this story: Richard Clough in New York at rclough9@bloomberg.net

To contact the editors responsible for this story: Brendan Case at bcase4@bloomberg.net, Tony Robinson, Susan Warren