27 US states report an increase in Covid-19 cases. Here is a look at where infections are rising. 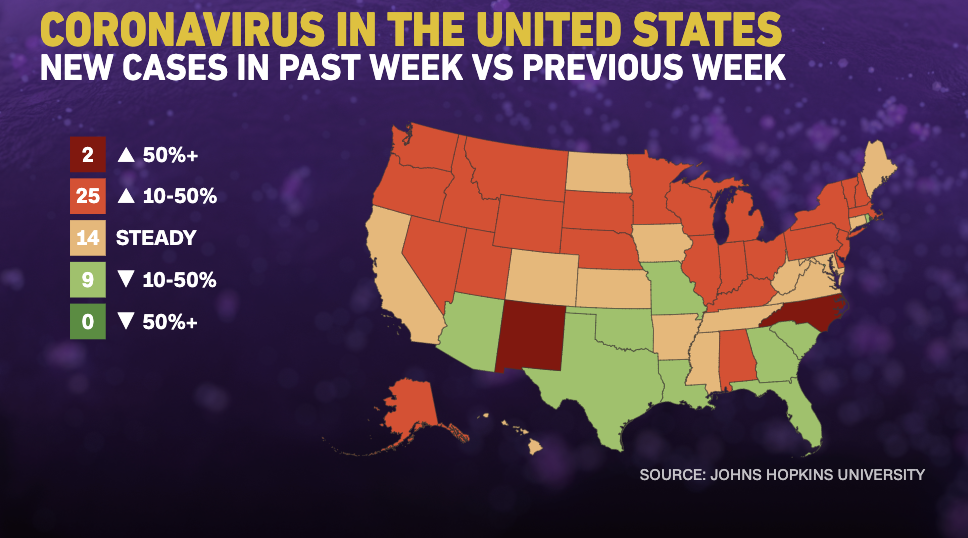 The first masks arrived at the White House in February by special order of the National Security Council and mobilized early to counter the new threat of the impending coronavirus. Job one in their readiness was to take personal precautions, prepare for the critical work that is at hand, several officials tell CNN.

But word that some NSC employees were being asked to wear masks quickly returned to the West Wing, and it was not long before a sharp dictum came down.

“If you have the whole West Wing continuously wearing masks, then it was not a good look,” reminded an administration official of the directive, which came from senior staff and lawyers.

The West Wing wanted to “portray trust and make the public believe that there was absolutely nothing to worry about,” the official said, revealing the image-conscious reason for the opposition to masks for the first time.

The directive opened up a schism in the White House complex that would ultimately hinder its ability to limit the spread of the new virus, which they now called Covid-19. Interviews with more than a dozen current and former administration officials show how this crack appeared and spread, although confirmed cases in the United States began to grow.

The officials all requested anonymity, either because they were not authorized to discuss the matter or because they shared private conversations with people who are currently in the administration. But they tell a coherent story of how the White House is trying to deal with the virus, hampered by the president’s fixation on one thing: optics.

The ensuing catastrophe has now cost more than 200,000 Americans lives in what is possibly the most politicized health crisis in the modern presidency. The radical polarization that is now gripping the country is tracing back to the very first workplace, where it really sank in, on the west wing of the White House.

White House spokeswoman Sarah Matthews responded to questions about this story, saying the president “took the virus seriously from the beginning, as evidenced by his administration, which took early steps in January to protect the American people.” It was Democrats and the media, she says, who were obsessed at the time – “over the partisan and vain trial against the trial.”

But several key officials tell a consistent and different story about image management and the problems it caused in pandemic response from the start.

“We lost so much time,” said a former administration employee, looking back. “It was all thought-provoking. This could have been so different.”