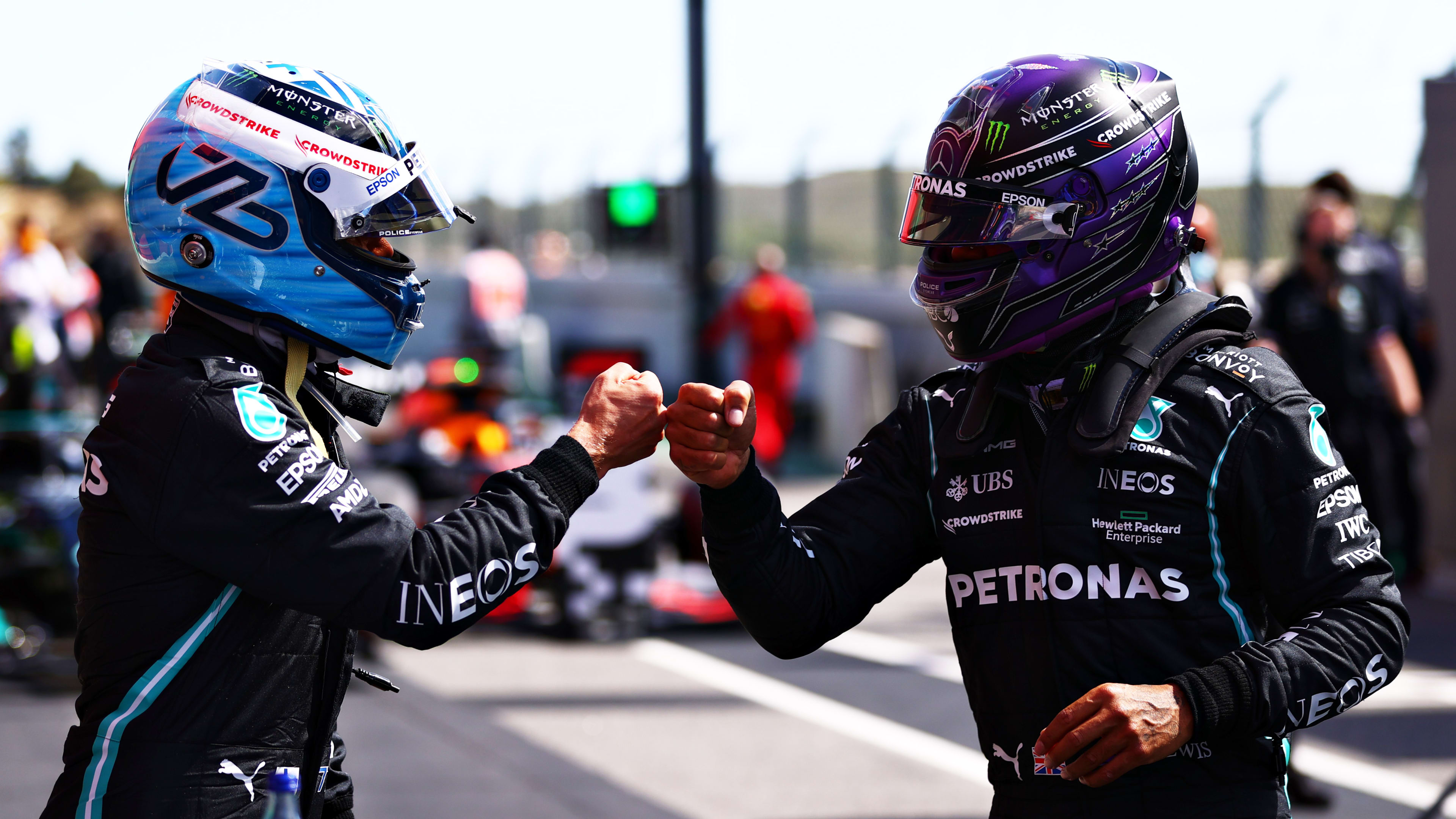 Valtteri Bottas made Lewis Hamilton wait for his 100th pole position as he lowered his Mercedes teammate by the thinnest margin to take pole position for the Portuguese Grand Prix.

The Finn set the pace on soft tires after the first race and piped Hamilton by 0.007 seconds, with Mercedes choosing to send both cars out on the medium, which they seemed to be faster at, for the second race.

However, the wind had picked up for the second race and both could not be improved, meaning Bottas will be the third different pole vaulter in so many races this season as Mercedes easily locked in the 71st front row.

1; after being forced on the back foot when his best shot was cleared for breaches of track.

His second run was only good enough for the third, about 0.4 sec. From the pace, with his Red Bull team-mate Sergio Perez driving a shotgun in fourth.

Carlos Sainz was the best of the rest in fifth, the Ferrari driver needed softs to get through to Q3 after a mistake on his intermission in the 2nd quarter, but got it together when it mattered, edging Esteban Ocon’s Alpine by only 0.003 s.

Lando Norris could not replicate his impressive pace in the first two qualifying segments as he struggled the top three and finished seventh to third in a row – but it was well clear for McLaren team-mate Daniel Ricciardo, who made a surprising exit in Q1.

Charles Leclerc finished three-tenths of teammate Sainz in eighth ahead of Pierre Gasly as Sebastian Vettel finished a series of 15 races failing to reach Q3 by closing the top 10.

Hamilton put himself under a little pressure as he ran wide at Turn 1 on a gusty Portimao, and as he crossed the course boundaries, the stewards erased his time record.

But the championship leader regrouped to get a second round on the same set of softs that were pleasantly good enough to see him through, with teammate Bottas going fastest of all.

His Red Bull rival Perez lost the back end at turn 4, which threw him down into the gravel, but he got back to the well’s content in the knowledge that his previous time would be good enough to make the 2nd quarter.

As the session progressed, the track got faster and faster with Sebastian Vettel jumping up from 15th – on the bubble – to a brilliant fourth, eventually finishing eighth.

But his Aston Martin team-mate, Lance Stroll, was not so lucky that the Canadian – who received the only new upgrade package this weekend – was knocked out in the 17th.

However, it was not the biggest shock when Daniel Ricciardo missed the cut in 16th and finished the day over a second slower than McLaren teammate Lando Norris, who finished second fastest for his first Q1 elimination since the Japanese Grand Prix in 2019.

READ MORE: ‘Not a result I feel good about’ – Ricciardo with a loss to explain ‘gloomy’ Q1 exit in Portugal

Esteban Ocon improved late to advance, with George Russell just scraping through in P15 as Nicholas Latifi, Mick Schumacher and Nikita Mazepin were the last three to leave Q1.

Mercedes, Red Bull, Ferrari, Alfa Romeo and Russell chose to go out on the medium for Q2, which seems to be the best tire to start the race on, with everyone else in softs.

Hamilton did not make the same mistake twice, this time making a build lap followed by a flawless push lap that was mighty and dipped into the 1m17s to comfortably set a pace that would not be beaten.

After the first runs, Russell, Tsunoda, Sainz, Giovinazzi and Raikkonen found themselves in the fall zone, where Norris again impressed with third behind the two Mercedes.

Red Bull did not seem to get as much performance out of the medium as their silver rivals, with Verstappen and Perez down in fifth and sixth, but that was enough to make Q3.

Vettel came in the top 10 for the first time since last year’s British GP with the ninth fastest time where Sainz had to turn to softs to make it to the seventh, a fraction behind his mid-sized team-mate Leclerc.

Q3 – Bottas gets the job done, as Red Bull does not shine

Most of the field chose to make a preparation lap to get heat into their soft tires before firing a shot, but Verstappen was not one of those the Dutchman chose to strike on.

Unfortunately, he lost the rear end at the top of the hill at turn 4, which sent him so wide that he exceeded the track limits and had erased what would have been a table-topping time.

Behind him, Mercedes made no mistake as Bottas won the first stroke and piped Hamilton by the smallest margin. They then switched to medium-sized tires, a rubber they had been faster on than the soft one this weekend.

Neither managed to improve, thanks in large part because the wind picked up, making driving on a very slippery surface even more challenging, meaning Bottas took his first pole since last year’s Sakhir Grand Prix.

Verstappen and Perez made it two Red Bulls in the top four for the second race in a row, with Sainz qualifying Leclerc for the first time in a Ferrari with fifth.

“It’s a good feeling to be on pole,” said Bottas, who took his 17th career pole. “It feels like it’s been a while, so it was nice to get a good qualification. It has been a weak point for me in the first two races to make the tires work.

“But again, this weekend we’ve been working hard and it’s nice to see it pay off. Puts me in a good position for tomorrow.”

The Portuguese Grand Prix starts at 1500 local time, which is 1200 UTC. Bottas is leading, but can he hold the two main title providers Lewis Hamilton and Max Verstappen and convert it into his first victory since last year’s Russian Grand Prix?