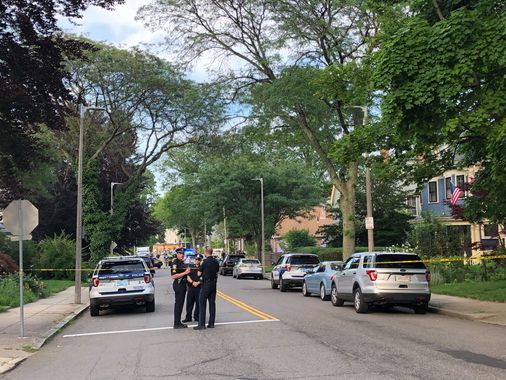 The shooting took place on Penhallow Street shortly before noon. 5:30 am after a hunt. The 19-year-old who the police did not identify was declared dead on the spot.

The officers were not injured, but were taken to hospital for evaluation. They were put on vacation while the police and law office in the Suffolk district examined the circumstances of the shooting. Responding officers were on camera cameras, and officials are reviewing the footage, police said.

Police commissioner William Gross gave details of the shot at a press conference at the departmental headquarters late Monday night. Around. 1

5:15, a witness told two officers on bicycles that shots had been fired in Town Field, a neighborhood park. The officers saw the 19-year-old and another suspect running from the park to Melville Avenue.

They split up and the two officers chased the 19-year-old on a bicycle, even though an officer eventually abandoned his bike and continued his pursuit. They caught him on Penhallow Street and saw that he had a gun, Gross said. They repeatedly ordered him to drop his weapon, he said.

Instead, the 19-year-old pointed a gun to the officers and fired, Gross said.

"I would like to note that these officers were in uniform with their brands showing clearly," he said.

The officers came back and beat the 19-year-old. The police did not say how many shots were fired by either the suspect or the officers. A gun was restored on stage.

The other suspect who ran from Town Field showed police and remained largely. The police did not give details of the initial report on the shot shot in the park.

It is the first police-involved fatality in Boston since February when a driver opened fire on two uniformed officers in Roxbury and wounded one. Kasim Kahrim, 36, had been released from MCI-Shirley less than three months earlier.

Mark Whalen, the officer who was shot several times in the upper body and underwent surgery, was released from the hospital in March.

Monday, Asraf Ali, 48, was outside working on his car when he saw a man running up Silloway Street, with two officers chasing him on foot.

Alarmed, Ali quickly helped his grandfather into their house. A few minutes later he heard the police again shouting to the man to drop his gun before three shots lay out, he said.

"You can't see this sort of thing in here, it's wild," said Ali, who has lived in the neighborhood for about 30 years.

Kevel Brooks, 38, worked at Eddy's Automotive on Dorchester Avenue when he heard a flood of shots. For a moment, a group of youths ran up Melville Avenue and into some nearby houses, he said.

"At first I thought they were fireworks, but when I saw children running up the street, I knew it was a little more," he said.

When he learned about the shooting, he hoped for the best.

"I was hoping everything was okay and nobody was seriously hurt," he said. "Because there were many shots."

In a post on Twitter, Boston Mayor Martin J. Walsh said: "Any acts of violence in our city are tragic and traumatic."

"We will continue to focus on crime prevention by creating more opportunities for our youth and a way away from violence," he wrote. "We won't rest until all residents feel safe and support in their neighborhood every single day."

Janelle Nanos of the Globe employees contributed to this report. John Hilliard can be reached at john.hilliard@globe.com.